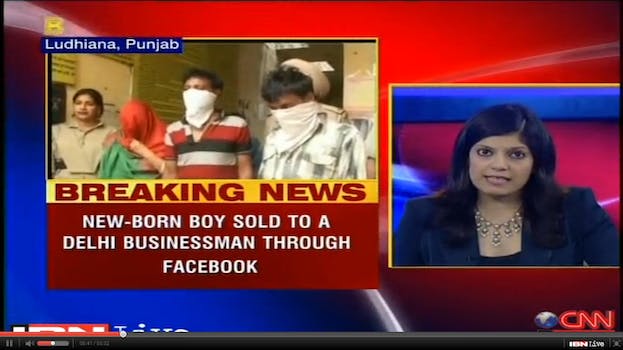 Police say a businessman in India bought a stolen baby on Facebook for 800,000 rupees ($14,749). Even worse, the newborn’s grandfather was the one who orchestrated the deal.

Here’s the full story: Feroz Khan snatched his grandson from the boy’s mother in Ludhiana, Punjab, India. He told his daughter the child was stillborn and sold the child to a nurse, who then reportedly sold the tot to a lab technician.

The technician, Gurpreet Singh, posted a photo of the 3-day-old boy on Facebook to get a higher rate before striking the deal with a businessman named Amit Kumar.

The mother became suspicious after her father gave her the cash from the initial sale. Authorities rescued the boy from the businessman’s Delhi apartment.

Police arrested Khan, his accomplice, and the two hospital employees. A case is also being brought against Kumar.

Police determined Khan wanted to arrange a second marriage for his daughter after she was deserted by her husband. Khan apparently wanted to get rid of the child so the boy would not be a liability in the attempt to marry off his mother.

Khan, 47, and the two hospital employees face seven years in prison if convicted of kidnapping.