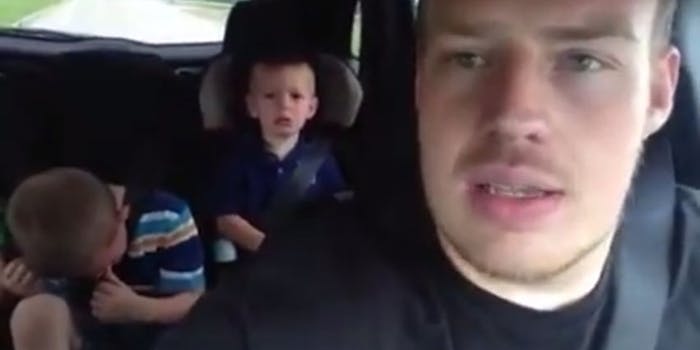 "You can't hit people because you don't get pancakes!"

If you’re craving pancakes, punching your friend in the face won’t bring them to you any faster.

One young child learned this lesson the hard way in a new YouTube video posted by user Jonathon Walters. On a recent drive, Walters scolded a friend of his girlfriend’s young son after learning the rather petty reason for why he threw a punch.

So far, the video has gotten over 260,000 views. Could Walters’s incredulous “You can’t hit people because you don’t get pancakes!” become a new catchphrase?

Until that happens, make sure you aren’t around his son if he hasn’t had breakfast. There’s no telling what he would do if he doesn’t get his side of bacon.

Update: After reaching out to the Daily Dot on Facebook, Walters informed us that the name Jim Smith is alias he uses to post on YouTube. We’ve updated the article with his legal name, per his request.