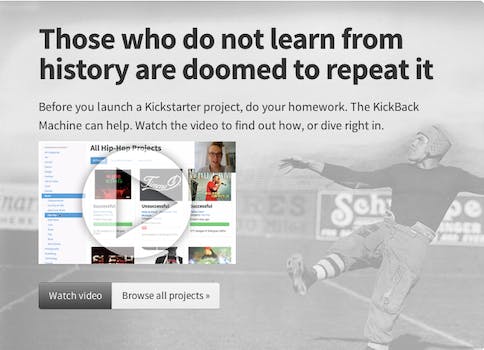 Are Kickstarter crowdfunders doomed to repeat the past? Not if a new site called The Kickback Machine can help it.

The Kickback Machine borrows its philosophy from George Santayana, the man behind the popular quote, “Those who cannot remember the past are condemned to repeat it.” In fact, a variant of the quote appears on the site’s homepage.

But what exactly is the Kickback Machine? Named after the massive web page archive the WayBack Machine, it’s a research tool aimed at those who are thinking of starting their own crowdfunding campaign. The site neatly arranges past Kickstarter campaigns by categories, making it easy for users to look at past projects that bear a resemblance to their one they have in mind. It also allows you to filter through campaigns with a similar funding goal to yours.

More importantly, the Kickback Machine also includes the information of past failed projects. Although Kickstarter doesn’t remove unsuccessfully funded campaigns from its site, the crowdsourcing platform does make it difficult for a user to find them.

The research tool is the project of Dan Misener, a public radio producer and tech journalist currently residing in Lyon, France. Misener believes that there is value in having as much information as possible.

“By hiding failed projects,” Misener writes on his personal blog, “Kickstarter makes it difficult for aspiring crowdfunders to take a hard, analytical look at ‘ventures that have failed.’”

“Whatever your approach to crowdfunding, your first order of business is to take a hard, analytical look at projects that have succeeded, as well as ventures that have failed. Your goal: To observe and learn how successful projects work, and to understand the subtle nuances and tactics that determine why some triumph while others don’t.”

The Kickback Machine certainly makes it easier for users to do just that.

Unfortunately, the site is not without its shortcomings. The most glaring being that the archive only goes as far back as June of 2012.

Still, if you’re looking to start a campaign to raise money for that killer art project you have in mind, at least you can now see what other people have done, and how they’ve fared.

Image via The Kickback Machine