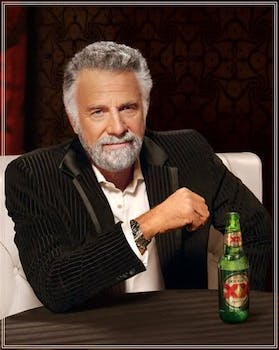 Karma Decay, a site we wrote about earlier, has been a huge hit Reddit today. By letting users search against an index of images posted to the social news site, it could serve as a powerful tool in fighting the bane of any Internet community: multiple posts on the same link or subject, or reposts.

But the story doesn’t end there. The site itself is full of meta (self-referential) Easter eggs; it laughs at the practice while fighting it.

Take the logo, for instance. That’s actually a collage composed of hundreds of popular image reposts from Reddit.

And the logo is itself a repost of sorts (at least in terms of concept).

Karma Decay’s creator, metabeing, invited another redditor, Iserys, to create it because, about a month ago he created a similar collage and posted it to Reddit. That image was a play on the “most interesting man in the world” meme.

That meme has been posted ad nauseam on Reddit recently; the image is one of the most commonly seen on the site.

Irsiery’s collage was a big success. It even hit Reddit’s front page — giving the redditor a few thousand karma points, the site’s internal mechanism for rewarding quality submissions. By mocking the practice of reposting images for karma, Iserys gained a whole lot of karma.

Karma Decay’s name, too, has an interesting background. A recent post on Reddit linked to a post on image board 4Chan, a site famous for generating image memes that spread throughout the Internet, and especially Reddit.

In the image, a 4Chan user complained, in part, that Reddit’s karma system was ruining the quality of content online.

From the ensuing discussion, one Redditor came up with the experession “Karma Decay” — and hence the inspiration for the site’s name.

Why all the meta humor? It’s Internet culture at its best: self-referential, derivative, and yet still wildly creative.

Or maybe it was just destined to be that way. Karma Decay’s creator named himself metabeing, after all.