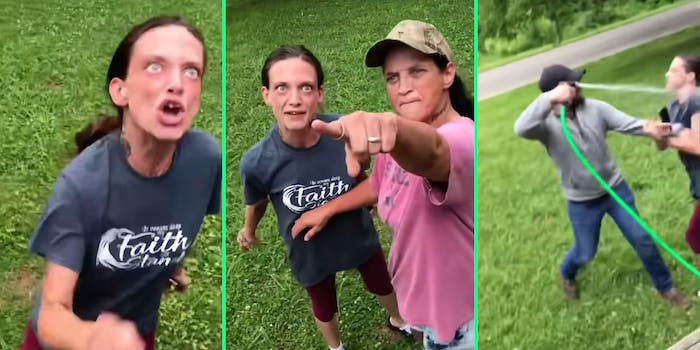 A screenshot made its way over to Twitter, where its meaning was taken away from the video it came from.

Memes come from anywhere: out-of-context movies, news items, and older viral videos. In the case of a new Twitter meme that’s become something of a reaction gesture, its context couldn’t be further removed from the source.

A couple of months ago, a video that captured an escalation between neighbors went viral on r/PublicFreakout, a subreddit that shares and documents public meltdowns. In this particular video, two sets of neighbors start to argue after one of them accuses another of being rude. They get in each other’s faces and more neighbors come out to argue with one another before the man who started filming the encounter picks up a hose and sprays his neighbors down.

On paper, it might sound amusing. But, as both commenters in the r/PublicFreakout thread pointed out, the end result is one of concern, pointing to the distress of the woman who took over recording the incident once the hose came out—not to mention fears of what might have happened if things escalated even further. The main woman in the video has been referred to as a Karen.

Early in the video, a woman with tattoos and a gray shirt gestures her thumb off-screen, presumably to gesture to someone she lived with. It’s that screenshot that made its way over to Twitter in the past week or two with its meaning taken away from the video it came from.

For instance, leaning on the Karen association, she’s been recontextualized as someone demanding to know why her order isn’t ready yet.

It’s also been used to inquire about playing Nicki Minaj while out dancing.

Want to illustrate a passive-aggressive email? Here you go.

It also works as a way to gesture in general or call someone out (whether it’s someone you know or a person you’re watching on TV) for their bullshit.

No matter what you’re gesturing toward, this meme proves that there’s always something to gesture.