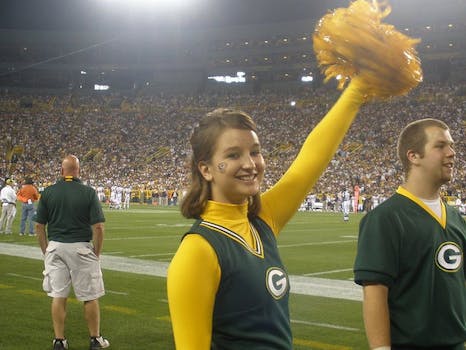 On Monday evening, the Chicago Bears Fan—a fan page on the popular social network that’s unaffiliated with the football team—posted a photograph of former Green Bay Packers cheerleader Kaitlyn Collins with the caption “Like If You Agree The Packers Have The Worst Cheerleaders In The NFL!”

She expressed her frustration further on Wednesday via YouTube, where she posted an anti-bullying video.

In the video, Collins asked her fans and friends to help her get the image removed from Facebook.

She noted that she had notified Facebook about the offending content but that administrators from the social network did not consider her situation to “qualify as bullying under their standards.”

That was more than enough of a rallying cry for cheesehead nation, who took to the Chicago Bears Fan page to assert their disapproval.

“Hang your heads low Chicago Bear Fans,” wrote Karen Moore-Franco. “Kaitlin Collins is a beautiful and emotionally strong young lady. You did not destroy her, you just managed to show the whole world what jerks [you are].”

“Bears are nuthin now all you guys are bullys cant wait till them packers beat yall again and yall miss the playoffs once again,” stated Nick Mabini.

Collins’ strategy to make her feud with Chicago Bears Fan public seemed to have worked. The Facebook page removed the post on Thursday, but not before it had garnered more than 3,400 likes and 1,400 comments.

An administrator for the Chicago Bears Fan page also posted the following note, discouraging their fans from bullying:

“We did not see all the posts to take down the Cheerleader pic until today.

“We get hundreds of messages per day and are not always on here. The issue has been resolved. Please respect one another and do not bully on this page.”

The anti-bullying sentiment coming from Wisconsin (and wherever else Packers fans reside) was also loud enough that the team issued a public statement condemning the page’s action.

“We believe showing passion for your team is about building people up, not tearing them down,” e press release said, according to WDJT. “We will continue to lead by example through our interaction on social media through our official outlets and hope our fans follow.”