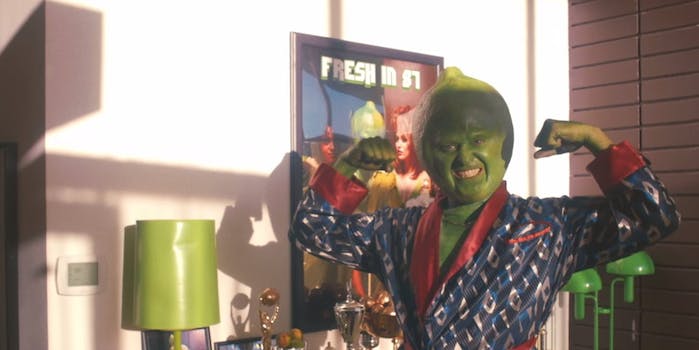 Timberlake might be half lime these days, but try stopping him.

Editor’s note: In a new commercial clearly designed to go viral, Justin Timberlake recounts the story of Rick “Sour” Vane in a bizarre attempt to sell Sauza tequila. What follows is a creative attempt to make sense of the convoluted backstory that led to this collaboration.

It’s eight o’clock on a Tuesday night, and Justin Timberlake has a sour look on his face. The 34-year-old triple threat, widely known for his sense of humor, strolls through his fame, seemingly grateful for every second of it. But Timberlake has transformed; his life is not what it used to be. Anyone facing similar circumstances would have completely given up.

Timberlake is a lime, and it’s going to take a whole lot more than that to kill his swagger.

We met that evening in his multimillion dollar SoHo penthouse. A hospitable host, Timberlake handed me a Corona, ready to tell his story.

“Yes, of course it’s been hard since the accident. I mean, I wasn’t a lime, now I’m some sort of citrus-human hybrid. But I’m still getting work. Doing what I can, you know?”

Timberlake is now the spokesperson for Sauza tequila, pitching the tequila-drinking public a smooth alcoholic experience that doesn’t rely on the crutch of a lime chaser. His character, Rick “Sour” Vane, is more or less an out-of-work actor in Los Angeles, only the work he and his fellow lime-men seek involves being sliced and consumed with tequila shots.

“The Accident,” as Timberlake calls it, occurred during a Jan. 2 performance at the MGM Grand in Las Vegas. Along with his creative producer, Nick Whitehouse, Timberlake spared no expense in recreating his 2013 album The 20/20 Experience—complete with lasers, video integration, and 3D mapping. The world tour spanned an entire year, taking Timberlake and company to every major city in the U.S., and went through Europe, Asia, Australia, and Africa. It couldn’t have gone better—until the final performance, that is.

“I said to Nick, this is Vegas, you know. We got to make this pop,” the now-green Timberlake said. Channeling his role as flashy Napster CEO Sean Parker in David Fincher’s The Social Network, his slight Memphis accent broke through the affectation. To up the stakes of the performance, and to wow the Vegas audience who had, presumably, seen it all, Timberlake and Whitehouse experimented with teleportation.

The stunt was meant to be the grand finale of the evening, transporting Timberlake from one end of the venue to the other, joining groups of dancers on opposite ends of the ballroom. “The rehearsals had worked like a charm. We used a baboon for the first few test runs, and she came out healthy and together,” Timberlake assured me, scratching the top of his rind. Some zest spritzed my hand as I jotted down notes.

“During the performance, though, a fan tossed some limes up on stage. I’m spontaneous and fun, that’s how I see myself in my art, man. I juggled those limes for a hot second, putting one in my pocket when I was done. I like keeping mementos from the fans, you know. How was I supposed to know the lime’s molecules would fuse with my own? I’m not some sort of biophysicist. I sing, I dance, I act. Science ain’t my thing.”

“Timberlake has it easy. He’s at least got some human in him. I’m all M&M.”

I was catching up with Red, the sardonic M&M. He and Timberlake became acquainted with one another in a support group for perishable actors in Los Angeles and New York. Red shared his experience as a consumable actor with me.

“They call me a ‘spokescandy,’ but I know what this job really is. I’m a pitchman selling out my own kind… No, I would never eat an M&M. I’m not a cannibal. I just found my niche, my way of staying alive in a world that wants to eat me.” Red, who recently renewed his contract with Mars for another decade, was given sentience in the 1990s when the company decided to employ mascots for their television commercials. This was in the heydey of the Budweiser frogs, a decade after the great Spuds McKenzie—all-animal mascots who ran no risk of consumption by their fanbase.

“I think Timberlake is handling it pretty well. He’s always had a good sense of humor, even when he was 100 percent human. I always remember seeing him on SNL and Fallon, doing his little Vaudeville act. Good kid. Real good kid.” Red expressed some jealousy at Timberlake, who, he feels, has less investment in protecting limes, instead pushing for their mass consumption. “At the end of the day, he’s a human. He doesn’t know what it’s like to be crunched up or sliced up for parties, special events, or for a pie crust. He can’t know that… I just wish it was the ’80s again. You know what I would give to be a fucking Noid?”

Timberlake doesn’t see things quite the same way as his friend. “Red’s got it wrong. I am half lime now. When I see a lime get cut, I have to hold back my tears, you know?” Timberlake can’t explain the feeling, but he feels what limes feel, and he wishes he could drop everything and fight for the limes. “At the end of the day, though, I’m still JT, and I have to keep moving.”

Since January’s accident, Timberlake still searches tirelessly for a scientist who can separate the lime molecules from his human DNA. “I haven’t met anyone yet who’s willing to go in and take everything apart. They’re afraid they’ll destabilize my entire body, and we’ll be left with something way worse. Maybe something you don’t want to know, something I can’t imagine. Or it could all be OK. There’s no way to know.”

While Timberlake deals in the theoretical, he’s still got a career to navigate. He’s in the studio working on his much-anticipated follow-up to 20/20, tentatively titled Spritz N Squint.

“Just because I’m a lime doesn’t mean I can’t cut a record. I’m JT. Sauza will take care of me in front of the camera, and they’re giving me just enough juice to stand behind the mic.”

One thing’s for sure: Timberlake is determined to bring sexy back once more. But this time, sexy is green and sour.