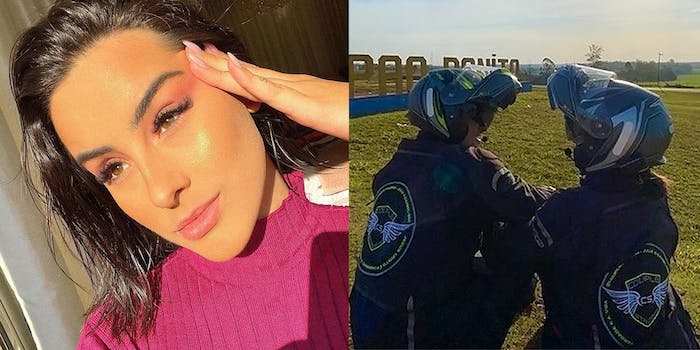 Influencer dies after posting to Instagram: ‘Life is short, let’s be crazy’

She was traveling the country by motorcycle with her husband.

Hennessy Cayuela had been traveling around Brazil by motorcycle with her husband Daniel Cayuela when the accident occurred in São José dos Pinhais (which is located in Southern Brazil). According to the Brazilian outlet G1, the couple’s motorcycle was hit by a truck that was changing lanes in the mountains. Hennessy Cayuela was flown to a nearby hospital, where she was later declared dead after suffering cardiac arrest. The Brazilian newspaper O Tempo reported that Cayuela was also injured in the accident and has already had multiple surgeries.

“We are desolate, in shock, a very difficult time,” Jerônimo Onofre, Hennessy Cayuela’s stepfather, told G1. “Julia was my daughter since she was six. We are suffering.

On Instagram, both Hennessy Cayuela and Cayuela—who were married for four years—chronicled their lives together for their Instagram followers both on their separate accounts and a couple’s account. Those updates would include everything from documenting their progress on building their home to sharing snippets of their travel across the country on their motorcycle.

Hennessey Cayuela’s final post on Instagram features her and Cayuela posing on and near motorcycles wearing matching pants, motorcycle helmets, and jackets with a caption that now feels ominous.

Cayuela’s post revealed their next day included plans to “descend the serpent and graceful mountain range” and where they planned to end their day.

On Saturday, Hennessy Cayuela’s friends and family came together to bury her with many of them wearing shirts that read “A vida é breve, vamos ser loucos,” the same phrase that appeared in her final Instagram post.