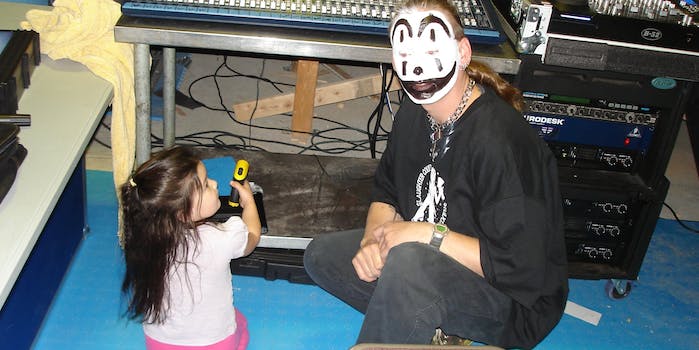 Yes, it's real—and it's insane.

That’s a real sentence, written in perfect summation of what purports to be the newest contender to the established glut of alternative cyrptocurrencies (Bitcoin knockoffs, to the cynical): the JuggaloCoin.

It’s named, of course, after Juggalos, the subculture of fans devoted to Insane Clown Posse, clown makeup, Faygo soda, and weed—a scene that may one day prove to have been an elaborate prank played on America by working class midwesterners and the journalists who profiled them.

But if JuggaloCoin turns out to be a ruse, its creator, “Papa Nutt,” put an awful lot of effort into it. A visit to juggalocoin.org shows extensive disclaimers and elaborate plans for charities and businesses to get bonus juggalocoins if they buy in early. He envisions a world where Juggalos “help each other out” around the world by easily sending each other funds, and selling each other used furniture without the hassle of cash. “It’s a great way to support the Family,” he writes.

As great as JuggaloCoin might be, few people, if any, seem to be using it. The coin is supposed to debut with an operation called “The Hatchet Drop,” whereby anyone who tweets their wallet with the hashtags #JuggaloCoin and #Coins4Fam would be gifted free coins. But a quick search on Twitter shows that of the handful of people who have ever used those hashtags, none included a wallet.

Of course, it’s possible that Papa Nutt knows exactly what he’s getting into, and is trying to bilk hardworking Juggalos across America out of their money. But if that’s the case, it’s not working well yet. Recall that all Bitcoin transactions are public. The Bitcoin wallet he uses to receive money has never had a transaction, as of this writing.

That raises an important question: when, exactly, is the Hatchet Drop supposed to happen? There isn’t yet a scheduled date, though the site promises that “today” is the launch of its marketing campaign.

The Daily Dot would have liked to reach out to Nutt for clarification, but he forgot to put his email address on his website. We did, however, find contact information through a Whois Lookup. But considering Nutt lists his address as “1 Clown Lane,” we don’t expect to receive a response.