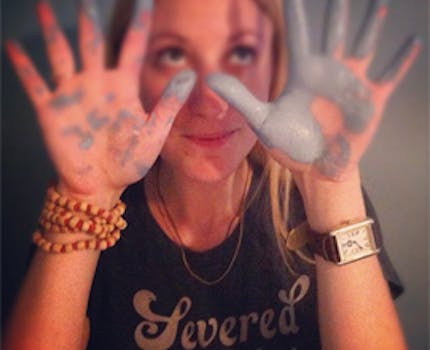 It’s hardly The War of the Roses, but to a Michigan woman named Jordan Miller, her ex-husband’s revenge is just as bitter: He just cost her a career and outed her for lying on her resume—to the tune of $100,000 a year.

Until yesterday, the 32-year-old Miller handled the online and social media presence for the University of Michigan (U-M), a position created in February. Miller, a former advertising copywriter who reportedly had nine jobs in three years before settling at the university, won the job amid fierce competition that included a viral marketing campaign by a 22-year-old.

The university paid Miller $100,000 a year to do things like develop its various Tumblr, Twitter, and Pinterest accounts. The goal was to create “a unique ‘voice and personality’ for the Michigan brand on social media.”

But it seems the persona Miller created was at least partially her own. Last Friday, a Reddit user, citizenthrowawayx, posted documents to the U-M subforum in a thread entitled, “UM Social Media Director Jordan Miller lies on resume about bachelors degree, keeps job.” The documents implied that Miller never actually graduated from Columbia College Chicago with a Bachelors in Journalism, despite what she put on her resume when applying for the position at U-M. The poster stated that since he had reported the information to the university HR and gotten no results, he decided to take the info to Reddit.

This time, it worked: On Tuesday, Miller voluntarily resigned her position with the university. “My intention was never to deceive the university, but I acknowledge that I made a mistake, and I’m very sorry,” she told AnnArbor.com.

Though at first citizenthrowawayx said his motivation was purely one of public interest—”I don’t like seeing my tax and your tuition money going toward paying someone ~ $100k/yr in earnings obtained through fraud”—he later revealed himself to have a much more personal vendetta: he is Miller’s ex-husband, seeking custody of his son.

“My real problem,” he told Reddit, “is that she lied about me in court and coached our son’s testimony to get my custody terminated”:

In case you don’t know how the family court system works, what happens is when a woman wants to go in and lie about you and accuse you of abuse, they will just admit all her hearsay statements as evidence without any physical evidence of abuse, and terminate your custody without granting you a jury trial.

So basically, I now have to prove to a prejudiced court that she lied about me, which can be very difficult, so I’m having to compile all documented instances of this occurring. This is one of those instances. It’s not entirely related but still speaks to the overall problem of her willingness to lie to achieve her goals.

While his primary concern may have been to boost his court case, rather than get her fired, public humiliation was another one of his goals as well:

She’s nearly bankrupted me with legal expenses, and frankly i’ve shot myself in the foot by doing this because my child support payments will increase since she’s lost her job. But ultimately my duty is to get custody of my son back who I only see now whenever Jordan deems it appropriate.

So Jordan, if you’re reading this, you know there is plenty more where this came from and I’m telling you this is just the beginning. I told you I was going to publicly humiliate you for lying about me and I meant it.

While some Redditors were supportive—“r/MensRights is with you, brother,” wrote one—others were flabbergasted.

“I’m sure you’ve got plenty of reasons to hate your ex,” responded UB_Illin, “but what you did was in no way good for anyone. Not for you, not for UofM, not for her, and not for your kid.”

Citizenthrowawayx insisted, “This isn’t motivated by revenge. When you’ve been lied about like I have and quietly working within the court system fails, the logical course of action is to expose it publicly.”

But outside Reddit, sympathies were with Miller. “I practiced divorce/custody law for almost seven years,” wrote Patti Smith on Damn Arbor, “and anytime someone starts accusing someone else of lying in court, filing false police reports and uses the term “pathological liar”, my red flags go up…. This sort of retribution scares me.”

“I may have spent too much time in divorce court, but all I’m seeing is a controlling personality here,” added Erika Jost. “Public threats? Inability to work within proper channels?The judge should send everyone involved for psych evaluations.”

Professional support for Miller came from Twitter. “You revolutionized the University’s take on PR/media, providing it with personality and a more human face,” a user named Kyle Summers told her.

“[W[hy does anyone actually require degrees anymore?” queried @hypomodern. “Was she doing a bad job? Didn’t seem like it.”

Certainly, U-M itself had no complaints. “Her work has been stellar,” its Vice President for Global Communications Lisa Rudgers told AnnArbor.com.

Despite the support—university officials had not yet decided how to address the issue—Miller resigned voluntarily. Perhaps this was due to a wish to avoid creating further hassle for her son, as her ex-husband is still trying to obtain custody.