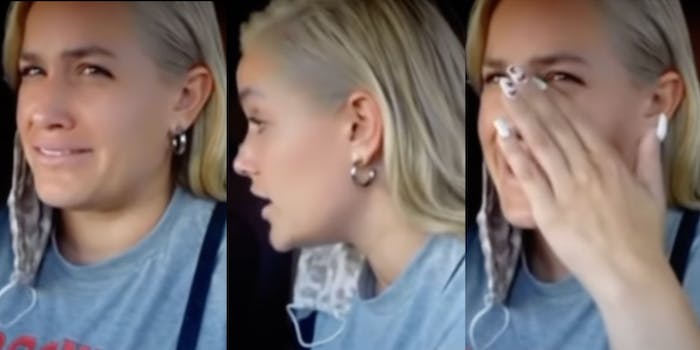 The video was about their sick puppy.

After receiving backlash for making her young son pose for a thumbnail while crying over their sick puppy, YouTuber Jordan Cheyenne’s Instagram and YouTube accounts are no longer available.

The California-based Mommy vlogger shared a video on Sept. 8 about a puppy she had recently purchased having parvovirus, a viral infection which commonly affects unvaccinated puppies and is often fatal. After she is done talking about the situation, but still in the car with her young son, she tries to get him to pose with her for the thumbnail.

“Act like you’re crying,” Cheyenne told her son in the now-unavailable video.

He responds to her, saying he is already crying.

Insider captured some of Cheyenne’s apology, before the video was removed.

“It’s so wrong. I should never have done that,” she said in the video according to Insider. “Today I want to let you know I’m so disgusted with myself for posing for a thumbnail on such an emotional video. It made me take a step back and realize I need to just be way more present in the moment and not even be thinking about anything like this when things are happening in my life.”

Insider also reports that the original video with the footage showing Cheyenne directing her son to pose had been removed and reuploaded sans the controversial moment. However, the video had already been shared to other social media platforms, where it received over 700,000 views in this Twitter thread alone.

The next day, Cheyenne sat down with fellow YouTuber Joshua Harbour for his “The Dad Challenge” podcast, where she announced that her son would be excluded from any future coverage.

Update 12:48pm CT Sept. 12: In a statement to the Daily Dot, Cheyenne explained her reasoning for taking down her channels.

“It’s been done because nothing matters but the health and well being of my child.,” she said. “Getting completely offline, canceling all videos and monetization, and prioritizing my child are all I care about. I’m disgusted and horrified at what I did and there is absolutely no excuse. It’s terrible on so many levels. I love my child more than anything and will regret this moment forever. I will not be going on any interviews or doing any PR or spending hours commenting on peoples videos about me, the right thing to do is get off line completely and prioritize family.”