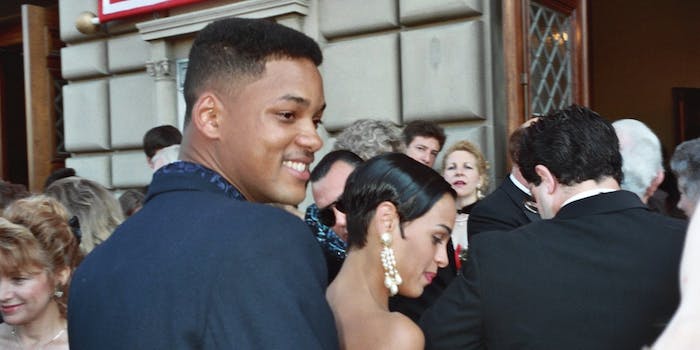 For the last time: Don’t believe everything you see on the Internet.

Over the weekend, Twitter icon Jonny Sun, a Ph.D. student in urban studies at MIT, tweeted what appeared to be a Google search result for the full names of Will Smith and his wife, Jada Pinkett Smith.

Will O. and Jada N. are raising Willow and Jaden Smith?! It seemed too easy—because it was. Will’s actual middle name is Carroll, and Jada’s is Koren. Still, corners of Twitter immediately blew a collective gasket over this (fake) revelation, tweeting and retweeting the altered image as gospel.

Still others reached for their bowls of popcorn and settled in to wait for the truth to come out.

@jonnysun the fact that this outs plagiarists just makes it BETTER

It’s a small trick, but it’s indicative of a much bigger problem on social media: joke theft, which made the headlines earlier this summer when aggregators like Fat Jew were exposed as simply stealing others’ tweets instead of creating their own viral content.

Now that he’s been hailed as a “genius” by Playboy and earned his own factchecking-friendly listicle on BuzzFeed, we reached out to Sun via email to talk about the tweet, social experiments, and joke theft

Daily Dot: What was your intent behind the tweet?

Sun: The whole point for me was to see if fun, believable misinformation would spread. I really just wanted to see if people would even believe something if it were posted like a “credible” image (which, on Twitter, just means it looks like a real screenshot). I tried to make something that was just crazy enough that it had to be true, and also something amusing and fun that people would share.

Why, specifically, did you choose to make the fake Google result about the Smith family?

I guess all of Twitter is a social experiment in how people choose to portray themselves and interact with others online.

I’ve been wanting to try something like this for a while, but I just couldn’t come up with the right piece of “information” that I thought would toe that fine line of “this is too crazy to be true” and also “this is so crazy it has to be true” while also being just obscure enough that no one would fact-check it. When I thought of this, I thought it would work for a lot of reasons. Jaden and Willow are absolute heroes on Twitter, and so I figured anything about them would catch on. Will Smith has a new movie out soon, so his name is very much present in pop culture. Also I think it was the anniversary of Fresh Prince a little bit ago that also makes Will Smith pretty present. People also generally like thinking celebrities are crazy too. The relationship of the names Will and Willow and Jada and Jaden have obviously been talked about forever because that is a real fact (or at least real speculation), but I wondered if taking it one level further and incorporating their middle initials would be believable too while being much weirder.

How quickly did it catch on?

Instantly—that’s the joy of Twitter. Within like 30 seconds, I think I got the entire range of responses from “I didn’t know this” to “I’ve known this forever” to “this is fake and you’re a liar.” It was stolen within minutes by accounts who have later deleted the tweet after people called them out on it!

Have you done any other social experiments on your Twitter in the past?

Something I’ve been doing for a while now is finding people who have stolen my tweets and responding to those stolen tweets as if I was just laughing at them. I have really great followers who always will pick up on when a tweet is stolen and call out the stealer whenever I do that… People are very loyal to and defensive of this weird little corner of Twitter comedy, which is really nice.

Something I’ve been doing for a while now is finding people who have stolen my tweets and responding to those stolen tweets as if I was just laughing at them.

Aside from that, I guess all of Twitter is a social experiment in how people choose to portray themselves and interact with others online. My account in a way is a writing experiment playing with voice and character. I’m pretty fascinated with the idea that people relate more to a character or an imagined persona than to a “real person” on Twitter. I think as a reader, it’s also easier to project what you want someone to be like the more abstracted they are from a real person.

Do you consider your Twitter account an art project? Are the tweets coming from you, Jonathan Sun, or a character? Or somewhere in between?

I consider it a writing exercise! It’s definitely a combination. I’d say I’m very aware of how I’m using a specific and character and voice I’ve developed and experimenting with what I can do with that! At the same time, I am genuinely attached to the character, and they are definitely my genuine thoughts and ideas being filtered through.

To me, character serves to create a voice in a medium that’s purely textual… I’m also interested in how you can affect the idea of comedic timing through those misspellings. Forcing a reader to slow down just for a millisecond because they are tripped up over a typo I think creates a delayed delivery that kind of translates to the actual time-based element of telling a joke in real life.

YES! I want to take to moment to say that content “aggregators” like the Fat Jew and Fuck Jerry can go to hell. Part of the fun of this tweet was being so easily able to see who would steal this “amazing true fact” without attributing it. And I’m glad I can bring some attention to the fact that the Internet has a huge problem with content ownership. I’ve met so many brilliant creators and writers and people on Twitter that—even though it’s “just Twitter”—are pouring a lot of their creative life into this. It doesn’t matter that it’s “just Twitter”—creative production is creative production is creative production.

What people don’t understand is that original comedians and writers on Twitter are not making any money from tweeting their material and that they’re putting it into the world FOR FREE! Just so it can be out there and for people to read and laugh at and respond to! The ONLY THING we ask for return is to be able to be credited for our work! For professional writers, Twitter is very much part of their actual careers, and for everyone else, Twitter plays an important creative role in their otherwise awesome lives. People like Fat Jew and Fuck Jerry who steal material and post it as their own are taking away the ONE THING that we can actually get back from our writing, which is the ability to say “I did this! Come look at some of my other stuff! Please maybe consider hiring me or even just connecting with me as a person and being my friend!” And if this isn’t bad enough, it makes it completely despicable that they are making money while doing this as well.

Another fun thing about this is that even verifying the real facts on Google is difficult. Will Smith’s real middle name is Carroll. But if you search “will smith middle name” on Google, the result shows that his middle name is Christopher!