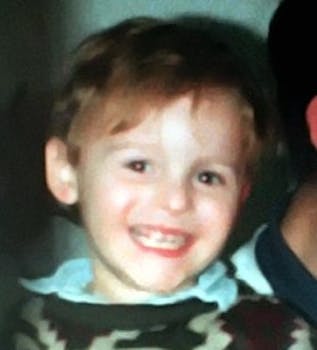 20 years after the crime, photos of a child-killer allegedly surface online

Twenty years ago, 10-year-old Jon Venables and his classmate Robert Thompson abducted and murdered a toddler named James Bulger. No one knows what they look like.

In 1993, 10-year-old Jon Venables and his classmate Robert Thompson abducted and murdered a toddler named James Bulger. The two Liverpool students were jailed for life but released in 2001 under new identities.

Now photos of Venables have (allegedly) surfaced on Twitter.

The photos in question, since deleted, appeared to show Venables with friends. A spokesman for the office of the Attorney General of England and Wales told the Press Association it had been “alerted to a possible contempt of court” but couldn’t confirm if the photos were actually of Venables, now 30.

A worldwide injunction banned publication of any information which might reveal their identities.

Bulger’s mother, Denise Fergus, didn’t comment to the Press Association on the incident. She has been opposed to the court order because innocent men could be mistaken for Venables and Thompson.

Venables’s parole was revoked in 2010. He was jailed for two years for possessing and distributing indecent images of children.

In 2011, a man from Exeter, England, purported to publish photos of Venables online, though at the time police decided not to investigate.