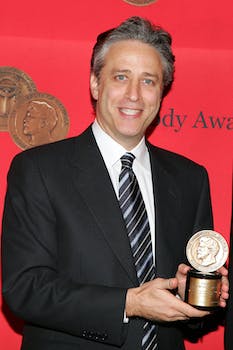 How Jon Stewart inspired me to rock the vote

"It made me realize that there was a great, big world beyond my cushy suburban life."

Nearly every night of 2004, at exactly 11pm, my parents and I gathered by the TV in the living room of our Long Island home to watch the news. And by “the news,” I mean The Daily Show with Jon Stewart.

Jon was already well into his tenure as the host of the news program masked as satire, but the show premiered when I was nine years old, and it would be a few years until I realized this amazing thing that I had somehow been living without. 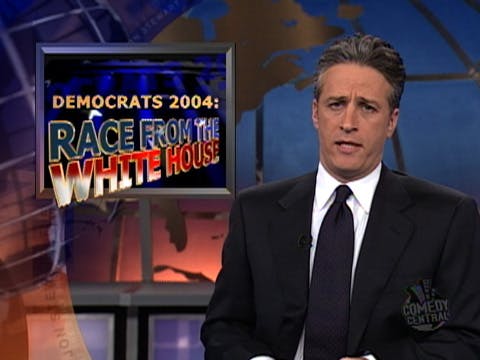 I may not have been Stewart’s earliest fan, but that didn’t matter. It was the perfect time to begin witnessing Jon’s craft: The Iraq War was in full swing, Bush-bashing was en vogue, and a presidential election rapidly approached. I was lucky enough to attend what was, at the time, the number one public school in America, but I would soon find my political education somewhere else entirely.

My earliest political memory is my mom defending Bill Clinton and arguing with our neighbor who was voting for George Bush Sr. in ‘92, while my friend and I toddled around on our Big Wheels. I didn’t know it then, but that liberal fire would stick with me into adulthood. Growing up in a house with two mega-liberal parents, it’s no surprise that The Daily Show ended up on the TV, but it’s difficult to remember who brought us into the fold.

As the incumbent, George W. Bush was the Republican party nominee that year, but the Democratic candidate was less clear. Each night, Stewart would break it down for us: from the maniacal scream from Howard Dean that would doom his campaign to John Edwards’ surprising surge and John Kerry’s ultimate nomination.

Sure, I may have initially been interested in the show because it was interesting news being told to me by an adorable and brilliant Jew. The thing that hooked me, however, was that it made me realize that there was a great, big world beyond my cushy suburban life, and that I could make myself a part of it just as Jon Stewart had. He made me understand. He made me give a shit.

I found myself invested in the 2004 presidential election because I had a horse in the race. After learning more and more about Kerry via Stewart’s quips, I decided to get involved. Sure, he wasn’t the most charismatic candidate, as Jon Stewart relentlessly pointed out. But after doing my own research on Kerry’s track record and realizing just how much I loathed the Bush administration, I developed an admiration for the senator from Massachusetts. I logged onto JohnKerry.com and signed up as a volunteer, made campaign phone calls to total strangers, and even shelled out a few bucks to order Kerry/Edwards pins as well as a few “Kids for Kerry” pins to pass out at school. 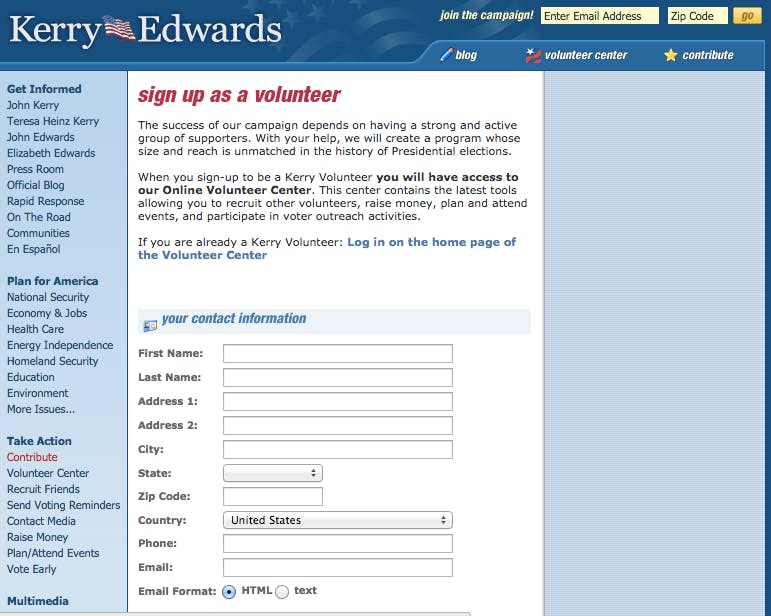 I proudly clipped one of each of the pins to my baby blue corduroy book bag and handed out the rest to my classmates. “Yea, but kids can’t vote! hahaha,” one of my classmates snapped back at me after I offered him a pin.

As the co-editor-in-chief of my high school newspaper, the JerEcho, I was inspired to create a special election issue to make sure that my classmates knew all about the candidates for whom their parents would be voting, and also to help prime us for the next presidential election in which we’d be eligible to vote. I even orchestrated a mock election to find out who the student body would choose to elect, could they be able to vote. Kerry won by a landslide with approximately 65 percent of the vote.

“He’s either the funniest smart guy on TV, or the smartest funny guy.”

One important lesson I learned from Jon was how to take a matter seriously while still being able to laugh at it. There was nothing inherently funny about the Bush era: Thousands upon thousands of American soldiers and Middle Eastern civilians died, the economy was on a downward slide (and would later fall off a cliff), and civil liberties were being denied left and right. But if you couldn’t laugh, at least a little, at the sad state of affairs, then all you’d do was cry. And Jon Stewart wouldn’t let that happen. Not on his watch.

You don’t have to look too far to find a comedian who lists Jon Stewart as one of her inspirations, but he was and is so much more than that. He wants his readers to appreciate his humor, but he’s always cared much more about them thinking he’s smart. Paul Begala, former liberal host of CNN’s Crossfire said of Jon Stewart, “He’s either the funniest smart guy on TV, or the smartest funnyman.” I’d say he’s both.

The same year I began watching The Daily Show religiously, he released America (The Book), which I instantly purchased. That year also brought his epic face-off with Tucker Carlson, the right wing host of Crossfire, a show which pitted liberals and conservatives against one another. “It’s not so much that it’s bad,” Jon Stewart said of Crossfire during his appearance. “It’s that it’s hurting America.”

The show was filmed at the School of Media and Public Affairs at George Washington University, the college I’d end up attending just a few months later. Perhaps it was a coincidence. Or perhaps I wanted to spend four years in the hallowed halls where Jon Stewart threw the ultimate smackdown.

Regardless, it’s hard to imagine his show didn’t play some role in my choice to go to school in Washington, D.C. Maybe it was his spirit that made me excited to cover a College Democrats canvassing trip to the swing state of North Carolina in 2008 and meet then soon-to-be Senator Kay Hagan. And when Barack Obama was elected a few weeks later—in no small part because of college-age voters like me—I felt vindication for Kerry’s 2004 loss as I sprinted to the White House gates to celebrate with my peers. 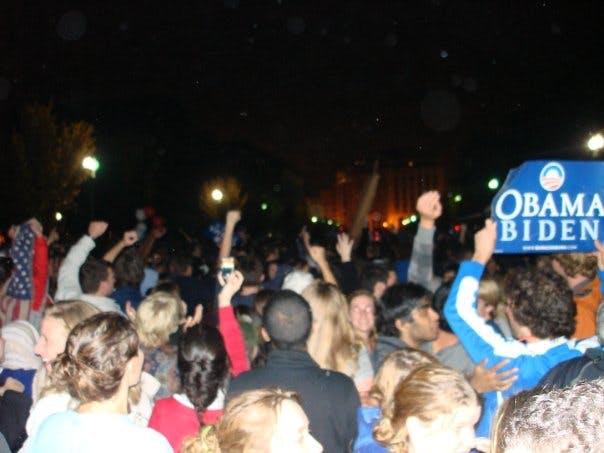 The Obama administration has had its ups and downs, but Jon Stewart has remained a constant. He not only inspired a generation of comedians but a generation of students, too, and in my mind, he’ll always be the consummate newsman.

Even still, when I go home to my childhood home on Long Island, my mom will occasionally say around 10:45pm “Want to watch Jon?”

We brought him into our home, and he helped me to see outside of it.

Photo via Peabody Awards/Flickr (CC BY 2.0)