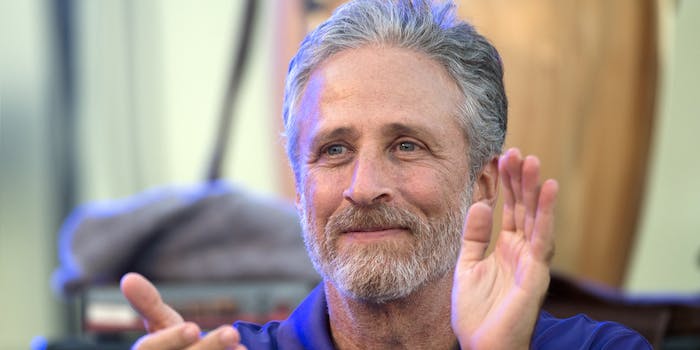 His new show will cover news and politics in a weekly, hourlong format.

Five years after his departure from The Daily Show, Jon Stewart is returning to host another current affairs show. His new weekly TV project has been picked up by Apple, with multiple seasons already confirmed.

Stewart hosted The Daily Show from 1999 to 2015, becoming the most famous face in American satire. Since leaving the show he’s kept a comparatively low profile, largely avoiding TV gigs. After making his directorial debut with the political drama Rosewater in 2014, he released Irresistible, a political comedy starring Steve Carell that wasn’t well-received by audiences or critics, this year. These were passion projects for Stewart, but the general consensus was that his strengths didn’t necessarily transfer to the world of filmmaking.

Stewart’s next show, the title of which hasn’t yet been announced, will focus on a single topic for each weekly, hourlong episode. According to the Hollywood Reporter, those topics will be dictated by “the national conversation” and Stewart’s personal advocacy work, much like on The Daily Show, where he used his platform to lobby for better healthcare for 9/11 first responders.

Stewart’s tenure on The Daily Show kickstarted the careers of John Oliver, Samantha Bee, Stephen Colbert, and Jordan Klepper, all of whom launched similar current events shows of their own. It’s a successful formula, but the landscape has obviously changed a lot since Stewart left TV in 2015.

Mainstream American satire has struggled to keep up with the chaos of the Trump administration, and audiences have evolved a great deal, both in terms of political division and the growing popularity of streaming services over appointment TV. It will be interesting to see whether Stewart revitalizes his methods when launching this new show, or if his Apple TV+ project turns out to be more of a nostalgic attraction for fans of his stint on The Daily Show.