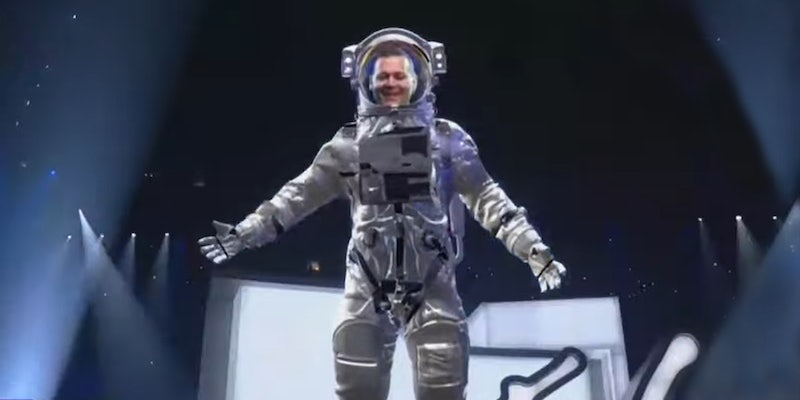 'We didn't even know they did that segment.'

At Sunday’s MTV Video Music Awards, there was a surprise appearance from Johnny Depp. But, allegedly, people who were at the event didn’t see it.

Depp appeared virtually at the VMAs as the MTV Moon Person, his face digitally enhanced and (someone’s) body suspended above what appeared to be the stage. He joked that he “needed the work” and in a later segment said he’s “available for birthdays, bar mitzvahs, bat mitzvahs, weddings, wakes.” There is what sounds like applause during each of his segments.

This appearance was rumored to happen before Sunday’s show, but it wasn’t live, according to tweets from people who attended the VMAs.

The account lilliandaisies collected tweets from a few people in attendance, after expressing disgust that people cheered for Depp’s appearance.

“From someone who was there, we didn’t even know they did that segment so it was just piped in applause if there was any,” said one.

Another attendee said Depp “didn’t actually appear to the audience, that was pre-recorded and they edited in the applause. they knew we wouldn’t have it.” Another claimed there wasn’t a “hologram” or anything “hanging above our heads.”

Depp’s line about needing “the work” is pretty rich considering he’s picked up movie roles and renewed brand deals since the trial, even after thousands of pages of damning court documents were unsealed earlier this month.

As the Daily Beast pointed out, MTV likely nabbed Depp so his fanbase would watch, and possibly help ratings. But MTV also gave awards to Nicki Minaj, whose husband has been accused of sexual assault, and the Red Hot Chili Peppers, whose members have their own history of assault allegations.