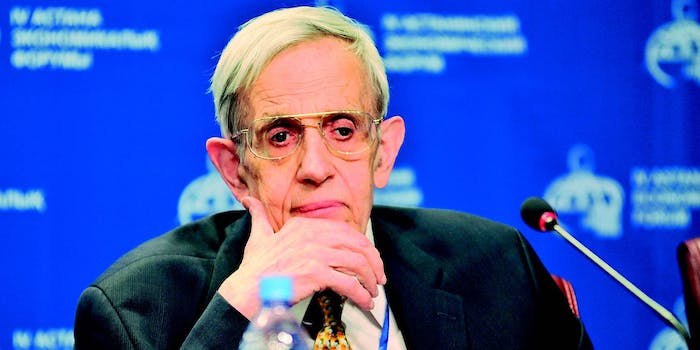 Nash and his wife Alicia were killed in a car crash on Saturday.

Mathematician John Nash, the troubled genius at the heart of the film A Beautiful Mind, has been killed in a car crash alongside his wife, Alicia.

The couple were traveling in a taxi on the New Jersey Turnpike on Saturday, when the driver lost control and crashed into the guard rail. They were on their way back from a trip to Norway, where Nash had just been awarded the Abel Prize for mathematics with his colleague Louis Nirenberg.

Nash, 86, had a long and successful career as a mathematician, winning the Nobel Prize in economics in 1994 for his work in game theory. His work influenced many fields, from military strategy to accounting, although he is best known in the public eye as a result of the 2001 film A Beautiful Mind. Starring Russell Crowe, the biopic focused on Nash’s struggles with paranoid schizophrenia.

In their later years, John and Alicia Nash publicly advocated for better mental health care, after their adult son was diagnosed with schizophrenia as well.

Crowe has already passed on his condolences on Twitter, along with many others mourning the loss of Nash and his wife.

We lost a great mind today, a beautiful mind actually. #JohnNash, you will be missed but your greatness will always be remembered #RIP

RIP John Nash. You were a brilliant man who overcame the hardest obstacles. The world has lost one of its few true geniuses today.

President Eisgruber says "we are stunned and saddened" by news of the deaths of Princeton mathematician John Nash and his wife, Alicia.

RIP Brilliant #NobelPrize winning John Nash & and his remarkable wife Alicia. It was an honor telling part of their story #ABeautifulMind

According to a spokesperson for the Middlesex County prosecutor’s office, no charges are expected to be filed.

Photo via Economicforum/Wikimedia (CC BY SA 2.0)