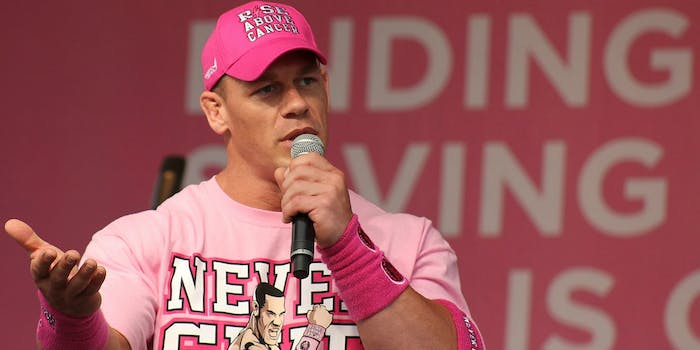 'I am overwhelmingly honored to interrupt such historic events.'

Love him or hate him—or love to hate him—John Cena is one of wrestling‘s biggest superstars. So it makes sense that he, at some point or another, would be considered meme-worthy.

Apparently, all you need is somebody screeching his name over his ring entrance music, and boom, you have a meme. And Cena, a 15-time WWE world champion, appears to be highly appreciative of the whole thing.

“This right here is the litmus test,” Cena told GQ magazine. “Because I’m kind of aware of what’s going on, and I’m fascinated with pop culture, and you can’t dictate pop culture. So when pop culture is kind enough to let you in, exploit you, and in a lot of cases make fun of you, and you’re just gonna be the vehicle to push this new gag, I totally embrace it. Whether it’s in praise or total humor, I don’t care. Just to be accepted at this point in my career, I think it’s pretty special. At the end of the day, I am overwhelmingly honored to interrupt such historic events.”

What an unbelievably perfect answer. Especially since the humor of the meme itself is sorta, well, eh. The answer, actually, is much funnier than the YouTube videos below.

You get the point.

Cena also was asked about his sex scene with Amy Schumer in the summer blockbuster Trainwreck, a scene in which Cena tries out some dirty talk (which included speaking Mandarin).

Yeah, it worked. But as good as Cena is in the ring and as viral as his meme went this past summer, he’s no match for the ultimate WWE viral machine: Randy Orton and his RKO out of nowhere.