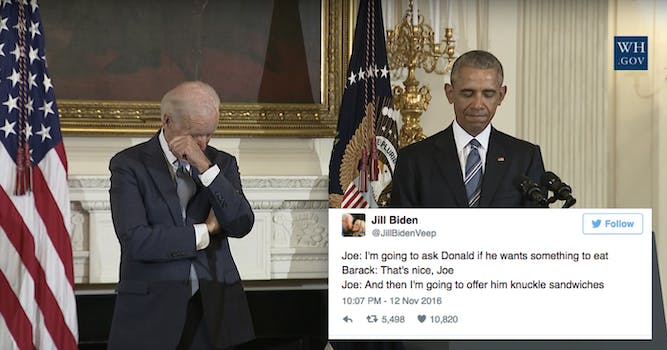 Joe Biden has a favorite Obama-Biden meme, and it will melt your heart

It's the cutest Obama-Biden meme there is.

As liberals mourned the end of the Obama presidency and fretted about the incoming Trump administration, they found solace in an adorable meme.

Twitter fanfic’ed the last weeks of Joe Biden and Barack Obama, with the lovable dope traipsing about the White House and exasperating the sage president again and again with pranks he had planned for Trump and Pence.

You know them, and you loved them, but let’s relive them.

Obama: "Joe, why are you still holding my hand?"
Biden: "I wanna freak Mike Pence out"
Obama: "But why?"
Biden: "Just roll with it" pic.twitter.com/o5KZZ0Ysgz

In an interview with Moneyish, Biden’s 35-year-old daughter introduced him to the meme and said that after seeing them he “sat there for an hour and laughed.”

Sounds about right. And he had a favorite one. Wanna see it?

D’aawww. Of course that’s his favorite.