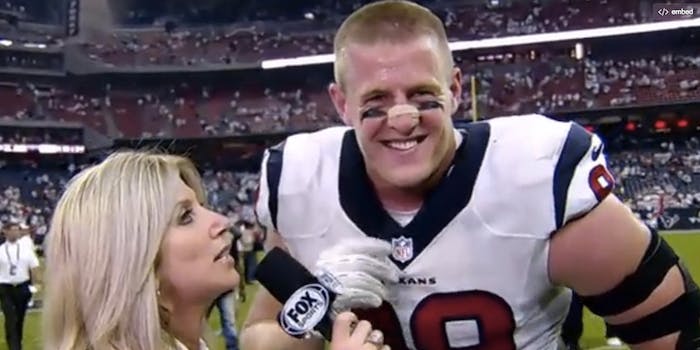 By now we know that humility is Justin James (J.J.) Watt‘s new middle name. Or maybe just a new initial.

Last week, the rather outsized (even by football measures) Houston Texan publicly signed a six-year, $100 million deal to remain the team’s human wrecking ball until he’s 31 years old. The PR folks down in Houston began to spin follow-up stories to keep Watt and the team in the sports spotlight—a fickle beam—for as long as possible.

Cue Watt after the Texans’ 17-6 victory over the Washington Redskins. In what had to be an arranged moment, Fox Sports reporter Laura Okmin asked the towering defensive end what he planned to do after signing a massive deal with the Texans. Watt’s response? “I Googled ‘What do rich people buy’ because I don’t feel like a rich person, and I don’t really try to act like a rich person, so I don’t know what they buy. I didn’t really like the stuff I saw, so I’m gonna stick with my humble lifestyle and just keep working out.”

Because every NFL fan and fantasy manager is searching Watt’s exact words, it’s difficult to recreate the results that led the defensive end to pledge humility on national television.

To take the road slightly less traveled, I went on the hunt for strange, crazy, or cool things rich people bought that us peons would never think of. Here are a few that Watt might want to add to his list should he have a change of heart:

• A diamond-encrusted Bluetooth headset, for the practical at heart: $50,000

• And if you miss the fun of training camp, how about The 85 Foot Inflatable Military Obstacle Course for $12,500 (plus $300 shipping) from the Hammacher Schlemmer catalog.

All kidding aside, Watt may very well be the genuine article: a truly humble yet gifted athlete. He was a walk-on at the University of Wisconsin after dropping out of Central Michigan and spending a brief time as a pizza delivery guy and realized day labor was not his thing. After a circuitous path through college, he has lots of new money in his pocket, so I’m betting he’s a delivery person’s best friend and big tipper.