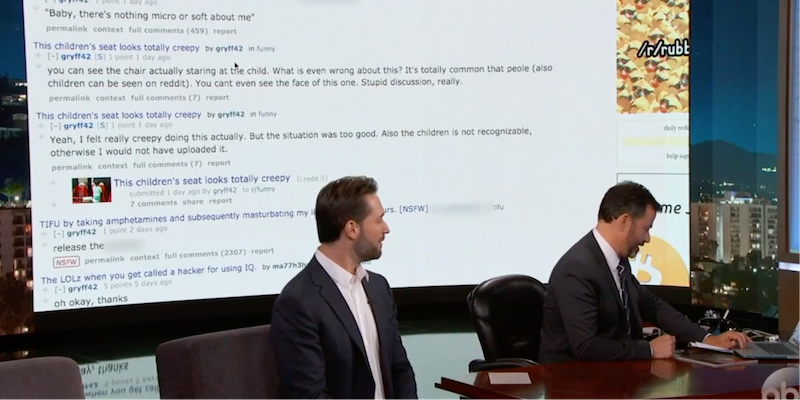 'There's some filthy stuff on here!'

Unless you’re a celebrity, a moderator, or someone particularly despicable, it’s easy to be anonymous on Reddit. Or, it should be. Sometimes you can mind your own business and still end up with your comment history broadcast on late-night TV. Just ask redditor Gryff42, who was made unexpectedly famous by Jimmy Kimmel Tuesday night.

Kimmel’s guest was Reddit co-founder Alexis Ohanian, and the two decided to have some fun browsing Reddit. The first thing that caught their eye was a front-page post about a dog that looks like William H. Macy.

“What’s amazing about this,” said Ohanian, “You have these users… this is Gryff42, who might have a really important day job, they might be a bored college student, they might be a head of state…”

“Nope, definitely not a head of state,” said Kimmel, loading up Gryff42’s user page. “We could go down a rabbit hole here. There’s some filthy stuff on here.”

The thing is, Gryff42 didn’t write the post. He merely commented on it, which caused it to show up on the comment history page Kimmel and Ohanian were browsing. Oops!

Kimmel quickly closed the laptop and moved on, but Gryff42 hasn’t been able to. He’s been fielding questions on Reddit all day about what it was like to be exposed on TV.

Gryff42 says he actually has “a halfways important dayjob,” and that he was disappointed Kimmel didn’t get past that one comment “to see that I’m actually not a filthy dude.”

Sure, Reddit has the right to reuse content people post on the site, but it’s kind of a low blow to spotlight a random user that way. However, Gryff is comforting himself with the thought that he has nothing controversial to hide.

“Besides that NSFW TIFU comment that was mistaken to be my submission theres nothing wrong about my reddit profile after all. Im pretty confident I never posted something I have to regret. But I think people will find out in the next days :),” he wrote.

It’s a weird way to get your 15 minutes of fame, but it could be worse.