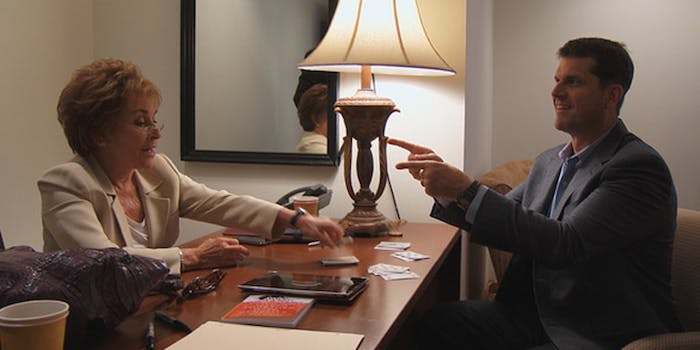 University of Michigan football coach Jim Harbaugh has never hid his love for Judge Judy. This week, she loved him back.

Jim Harbaugh has been a public fan of Judge Judy for quite some time.

In 2013, the former 49ers and current University of Michigan football coach actually attended a taping of Judy Sheindlin’s TV show, and proof exists below as Harbaugh, the second man on the right, wears a maniacal grin after Judge Judy predictably said something snarky. And here the two are enjoying what I’m sure was a mutual embrace. The pair is obviously tight, so when CBS this week extended the contract of the 72-year-old judge through 2020, you knew Harbaugh would be happy with the judgment. Witness …

Big Congrats to Judge Judy on signing her contract extension thru 2020 from a Devout Fan!

That kindness meant Sheindlin was sure to publicly respond.

Thank you so much for the kind wishes @CoachJim4UM, best of luck this year at Michigan!

And equally as obvious, Harbaugh would continue acting like the world’s biggest Judge Judy fanboy.

A shout out from @JudgeJudy would make anyone's day, thank you! The BEST! & Excellence are easy to spot, Judge Judy is it's highest level.

Clearly, these two were made for each other.

But Harbaugh made even bigger news this week—or, at the very least, more important news—when, on the same day as his original tweet to Judge Judy, he administered first aid and helped keep warm the victims of a rollover car crash on Interstate 94 in Michigan.

It was a great display of simply being a human by Harbaugh, and I’m sure Sheindlin approved (I’m assuming she sent him a congratulatory Twitter DM or something). Because, as we all know, playing the role of hero comes and goes, but having a friend in Judge Judy lasts forever.