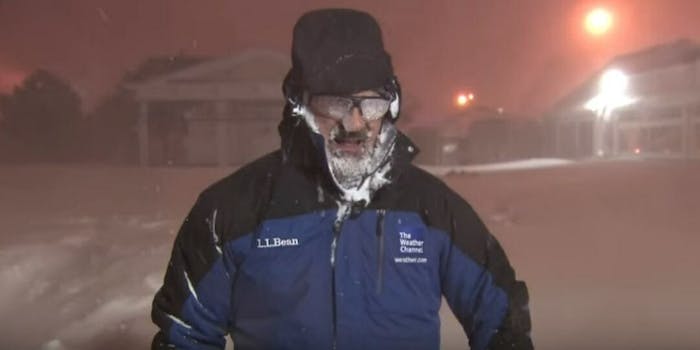 Don't come around these parts.

If the most famous weather reporter in the country is coming to your geographical location, there’s a good chance that your life is about to be upended. So, in order to stave off another disastrous storm heading its way, the Santa Rosa County, Florida police department is trying to be proactive—by issuing a trespass warning to the Weather Channel’s Jim Cantore, calling on him to stay far, far away.

With Hurricane Michael approaching the Gulf of Mexico and with Santa Rosa County on the state’s panhandle potentially in the pathway, the sheriff’s department has been using its Facebook page to keep its citizens informed of the incoming weather and about where to take shelter, how to find your evacuation zone, and why you should stay out of the water.

But it’s also keeping its sense of humor. In other words, Jim Cantore: Don’t come knocking on our door.

Everyone know whats in store when Jim Cantore shows up. So we issued a little notice. lol

The photo was accompanied by the caption, “Everyone know whats (sic) in store when Jim Cantore shows up. So we issued a little notice. Lol.” In the special conditions section of the trespass warning, the office wrote, “Non-business related visits only” and that he was welcome to show up in the winter months.

It’s unclear if Cantore has seen the joke. He’s too busy tweeting terrifying images like this.

Visible imagery of storm shows #Michael still getting its act together and as atmospherics improve for development by this time tomorrow it could be a whole different animal. pic.twitter.com/hfaxRN0nJ1

#Michael continues to hold its own despite the shear which should weaken further. All signs point to more strengthening today.
This remains a very dangerous situation for Florida panhandle and big bend residence, and the stronger it gets the longer it takes to wind down inland. pic.twitter.com/3gS1jj5S13

Cantore is probably used to this kind of attention anyway. In this 15-year-old USA Today profile, Cantore talked about how his fans lap up his passion for the weather. But even back then, people knew to be wary of a Cantore sighting.

It is practically gospel among weather buffs that wherever Cantore goes, bad weather is probably close behind. Weather Channel viewership sometimes quadruples for a big weather deal like Claudette, and that has made Cantore arguably the best-known meteorologist in America.

During Hurricane Floyd in 1999, someone posted a sign outside a Florida restaurant: “If Jim Cantore is here, Floyd must be near.” Cantore admitted that on an airplane once, “A lady saw me and said: ‘Oh, no! You can’t be going to my town!’ She was really upset.”

If bad weather is coming your way, though, you can’t stop Cantore from showing up unannounced and uninvited. But if there’s a saving grace it’s this: At least we know the Santa Rosa County Sheriff’s Office won’t be going after Cantore for fakery. Unlike, ahem, this weatherman.

So dramatic! Dude from the weather channel bracing for his life, as 2 dudes just stroll past. #HurricaneFlorence pic.twitter.com/8FRyM4NLbL