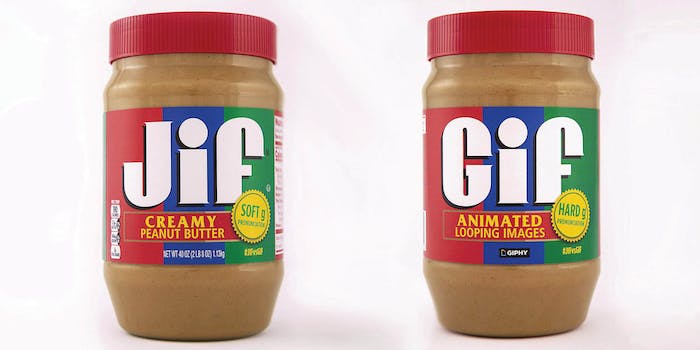 It’s a debate as old as time itself. Err, a debate at least as old as the modern incarnation of the internet, anyway? How does one pronounce the word “GIF?” Is it a hard-G “guh” sound, as in “Graphics Interchange Format,” which is what the acronym stands for? Or is it a soft-G like JIF, which is oddly the pronunciation that was intended by the creators of the format?

It looks like we finally may be able to put the argument to rest, thanks to Jif peanut butter and online database Giphy, both of which have teamed up to make a definitive ruling for once and for all. And the verdict is that GIF should indeed be pronounced with a hard-G, as in “gift,” “garden,” or “gate.”

The two entities have issued a “Joint Pronunciation Proclamation” and even launched an entire website devoted to the cause.

When is it okay to call a GIF a “Jif”? Never. Help us put the lid on the infamous internet debate once and for all. #JIFvsGIF https://t.co/INoJNiquwq

“It’s been the most polarizing debate of our time, and we’re not talking about whether pineapple goes on pizza,” reads a statement on JIFvsGIF. “No, we’re talking about the dispute that’s dragged our good name into the front lines of pronunciation combat. We’re talking about JIF vs GIF. Soft G vs Hard G. And we think it’s time you talked about it, too.”

In light of this hard-G ruling, #TeamHardG and #TeamSoftG did, in fact, have plenty to talk about. Although if the ensuing discussion on Twitter was any indication, it seems as though folks are still as divided as ever.

GIPHY teamed up with JIF to make a limited-run of GIF/JIF peanut butter jars for all my fellow Hard-G lifers out there. Available now on Amazon! https://t.co/44HZqJ9cSq pic.twitter.com/s9NSaEs8ps

In the greatest debate of our time

I stand on the right side of history

I have a terrible, dark secret to share with you.

I pronounce GIF like @Jif peanut butter, and I don’t care who knows it.

And because what viral marketing stunt would be complete without a shameless cash grab—Jif is offering limited-edition, 40-ounce jars of peanut butter on Amazon to ostensibly explain the difference. Or as they put it: “A collaboration between two titans of pronunciation that unequivocally declares, ‘Jif is peanut butter, GIFs are animations.’ This is your lucky day, and this is that jar.”

The limited-edition jar of JIF costs $9.99, or approximately 25 cents per ounce of peanut butter—nearly twice the amount of a normal 40-ounce jar of JIF. But the satisfaction of knowing you’ve been pronouncing “GIF” correctly this entire time? Priceless.