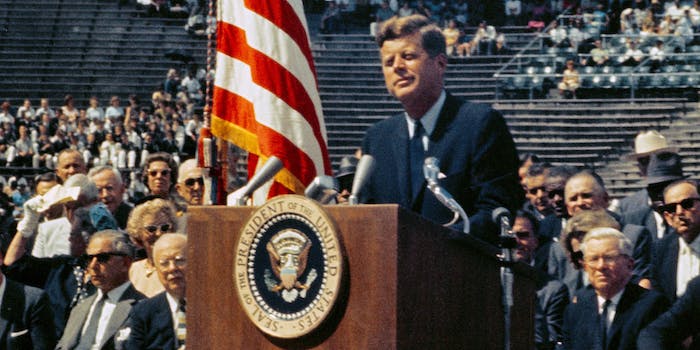 Photo via NASA on The Commons/Flickr (Public Domain)

John F. Kennedy once asked his mom to stop contacting world leaders without telling him first

Rose Kennedy had no chill.

Just because someone is president of the United States doesn’t mean they can’t still get embarrassed by their mother. Case in point: former President John F. Kennedy had to send his mom, Rose, a note asking her to stop contacting foreign heads of state, specifically Soviet leader Nikita Khrushchev, without clearing it with him first.

The letter was dug up by presidential historian Michael Beschloss for Mother’s Day four years ago, but it was making the Twitter rounds on Sunday along with a new letter Beschloss tweeted from Kennedy’s mom. The original note is drenched in the distinct tone of a son who doesn’t want to tell his mom what to do but who also doesn’t want her cramping his diplomatic style.

Here just after Missile Crisis, JFK asks Mother to pls not write Khrushchev again w/o asking him: (via @JFKLibrary) pic.twitter.com/Jz0soy2amT

The letter was sent at a highly-charged time, too, full of uncertainty and political peril. The date on the letter, Nov. 3, 1962, was less than a week after the conclusion of the Cuban missile crisis, the closest call with nuclear conflict in the entire Cold War era.

Kennedy politely-yet-firmly asked his mom not to contact foreign leaders without giving him the heads-up first and referenced “requests for pictures,” raising the possibility that this was prototypical embarrassing mom behavior. Gotta get that photo of little Johnny with Khrushchev signed, right? Not even the president, in other words, is exempt from the occasional burst of embarrassment at the hands of their mother.

On Sunday, Beschloss tweeted out a return letter from Rose Kennedy, indeed promising to let her son know the next time she wanted to get in touch with a foreign head of state.

Rose Kennedy responds to JFK's note about her contacting Khrushchev–pledges to notify him before writing Castro: pic.twitter.com/j9lO6qTDEC

Specifically, she promises to ask his permission before trying to get Cuban leader Fidel Castro’s autograph, a pretty wry response since the Cuban missile crisis had come to an end. In other words, anyone who’s ever felt that familiar twinge of embarrassment when mom pulls out the baby pictures ought to calm down, because it can definitely get more awkward than that.