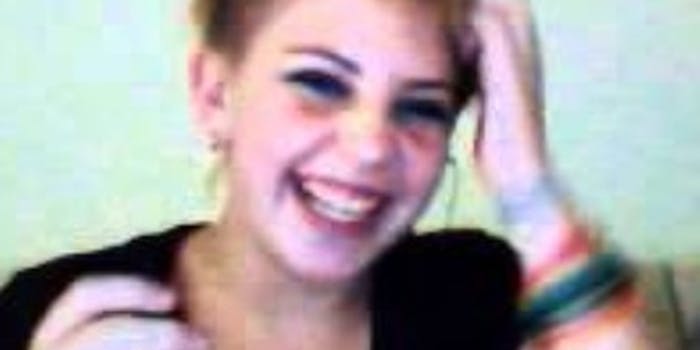 After making national news and a stint in foster care, the 13-year-old vlogger is now making videos as a genderqueer named “Damien."

Last summer, Jessica Leonhardt, then 12 years old, had a friend upload an apology vlog to YouTube, since she herself was banned from using a computer while in foster care.

One year later, the Internet finds Leonhardt living back home with her mother and joyfully making videos as a genderqueer named “Damien.”

Leonhardt may have moved on from her troubled online past, but various Internet communities have not.

The “Jessi Slaughter incident,” a tear-soaked Web drama and bullying campaign that began on 4chan in 2010 and at its height aired on national television, had, and will continue to have, astounding repercussions on Leonhardt’s life.

Strangers and Internet busybodies all across America confronted Jessi Slaughter, as Leonhardt called herself back then, over her lewd mouth, disturbing behavior and sexually provocative antics (including accusing one singer of rape). Leonhardt’s case of online bullying  is still the most publicized and extreme case of online harassment to date.

“She basically trolled the internet with her videos and the internet held up a giant middle finger at her,” Geisha89 wrote in a YouTube forum post discussing Leonhardt’s return to the Internet.

During the Jessi Slaughter saga, Internet users bombarded Leonhardt with hateful messages, prank calls, and death threats. While some trolled Leonhardt because they despised her, others harassed her because they were trying to get the attention of Leonhardt’s parents.

Leonhardt’s father noticed, but instead of insisting she get off the Web, made two menacing and bizarre appearances in her videos, which only spawned memes and more ridicule. The situation escalated and local police got involved.

Some time after the family appeared on Good Morning America to discuss the cyberbullying, Leonhardt was transferred to foster care to receive psychiatric treatment, after she was reportedly punched in the mouth by her father. Her father passed away due to a stroke. Incidentally, Leonhardt’s father died on Aug. 14, the same day that Leonhardt chose to upload her video expressing how “sorry” she was “for everything.”

Instead, Leonhardt laughs with her mother on camera, attends her school’s 8th grade dance, and professes her love for the band AFI. Filmed on a cheap camera, the dialogue in her vlogs is at times unintelligible, but one thing is clear: Leonhardt is smiling in almost every single video.

Not everyone has grown up, though.

Leonhardt’s videos, hardly viewed more than 1000 times, get an overwhelming amount of dislikes. This harmless video of Leonhardt playing with her dog, for instance, had 38 dislikes and only five likes at press time.

The old Leonhardt would have reacted aggressively to these comments about her deceased father d with a profanity-laced vlog taunting her haters. Now, all she has to say to them comes in the form of an eye roll and a simple retort, “No questions about my dad.”

Leonhardt’s obvious and newfound stability has attracted online defenders, more than she had a year or two ago.

“Really? Some of you just can’t let it go can you?,” Emibakesthosecookies asked on YouTube, in response to the various trolling comments, some of which call Leonhardt derogatory names. “She is trying to change but you just won’t let her will you.”

While Emibakesthosecookies’ sentiment is sweet, it’s a little off-base: Leonhardt has already changed.

This girl, hardly a teenager, faced the wrath of the Internet and came out alive. It looks like Leonhardt is going to be OK after all.