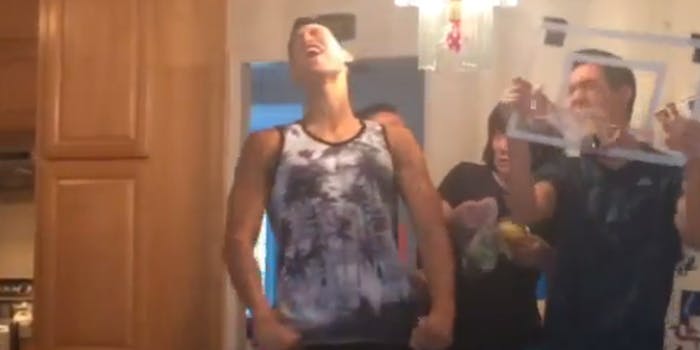 Tough to imagine what it would truly be like to spend the summer at home with your brother who happens to be a guard for the NBA’s Houston Rockets. But we’ve recently received a decent glimpse thanks to the sporadically active Instagram account of Internet–beloved hoopster Jeremy Lin.

The 25-year-old Lin, whose past two seasons have been spent somewhere between the bench and a bad jump shot, has spent the past week running a preseason Jeremy Lin Fan Appreciation Week, complete with a “Mean Tweets” segment on Late Night With Jimmy Kimmel and some weird quiz stuff Lin’s rattling off on Twitter.

Yesterday, Lin took the entertainment aspect of the stunt to another level, posting a video to his Instagram account that found him dunking on a mini basketball hoop over a series of his parents and siblings. He gets his sister on the sidewalk, dunks on his brother while he’s sleeping, and eventually jams one home on his mother in the kitchen.

It’s amusing. We encourage more of this from athletes when at all possible.