The reigning ‘Jeopardy!’ champion is a sort of hot jerk

Watching Jeopardy! is a favorite pastime for many, an easy way to wind down after dinner with trivia and good-natured competition. But the current reigning champion has been totally extra during his multi-game streak.

Meet Buzzy Cohen, with his thick-rimmed glasses and well-tailored suit—a recording industry executive from Los Angeles. Thursday night, he’ll be heading into his ninth game, with an eight-day winnings of $147,803. According to Uproxx, the last couple of matches Cohen has racked up double the dollar amount his competitors have.

And that domination has allowed him to be a little bit of a jerk. During one round of Final Jeopardy, where he knew that he already had the game in the bag, Cohen waged $0 and answered “What is see you tomorrow Alex Trebek?!” with a sleazy smile on his face. He was up to the same antics again at a following match, writing, “Who is you aren’t rid of me yet Trebek?”

In an interview with the Wrap, Cohen says he’s just having some fun, since it’s a game show. We get it, you’re trying to be funny or whatever, but this behavior flirts with bad sportsmanship.

Understandably, Cohen has caught the eye and ire of the Internet. Many are annoyed with him, while others have taken the glorious route of roasting him.

Is the jeopardy teachers tourney seriously this easy? At least I don't have to see that cocky hipster doofus Buzzy again

Meanwhile, others have gotten a case of the thirst for Mr. Cohen.

I have never loved a man the way I love Buzzy Cohen on #jeopardy pic.twitter.com/QINXdxATvR

I have an increasingly serious crush on Buzzy Cohen. #Jeopardy

Cohen might have the haters beat with all the money he’s won, but we’re still hoping someone takes him out soon. We’re rooting for you Riley and Dan (who for the record, is most definitely hotter). 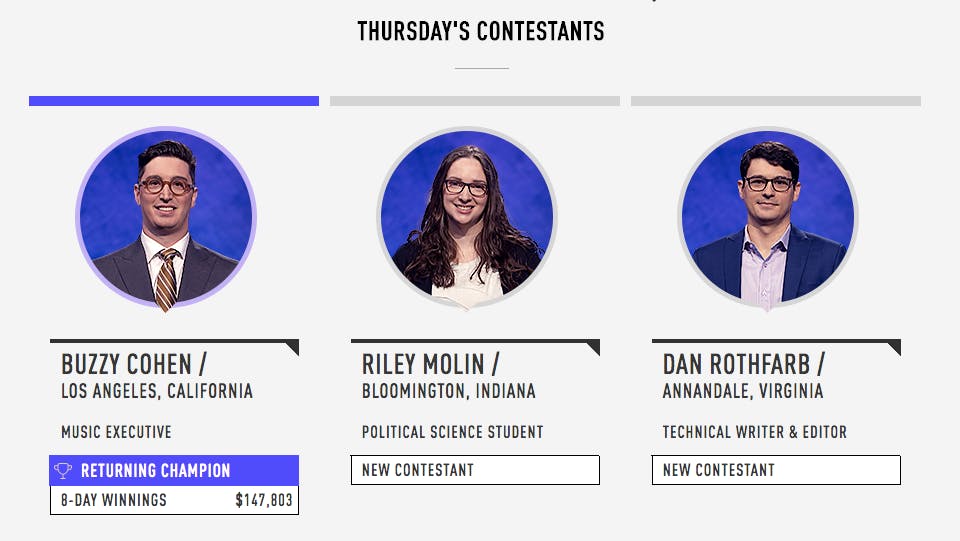