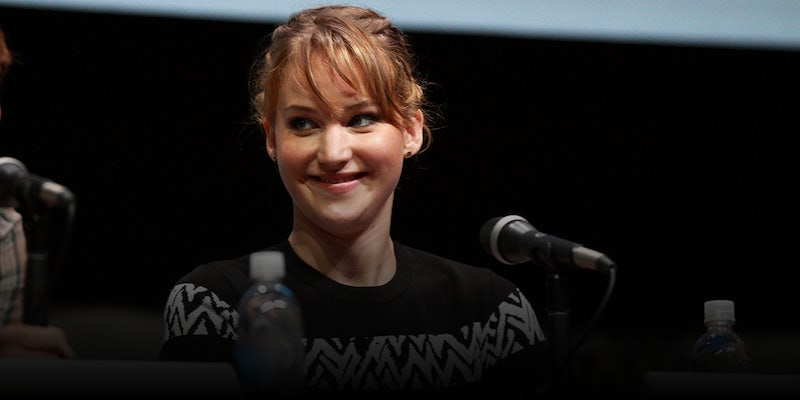 If Lupita Nyong'o loses Best Supporting Actress on Sunday, we shouldn't hate Jennifer Lawrence for it.

After Jennifer Lawrence’s surprise win over Lupita Nyong’o at this month’s BAFTA awards, the chatter on Twitter reignited the alleged Jennifer Lawrence backlash that’s been brewing in recent months. Lawrence and Nyong’o have been fighting a close race for Best Supporting Actress all season, the hardest-to-call category in this year’s already heated Oscars. But instead of making it just about the performances, pundits are making it increasingly personal, as if we were morally obligated to love only one of them and burn the other at the stake.

Over at Crushable, Alexis Rhiannon bemoans that she’s “over” Jennifer Lawrence, pitting Lawrence’s cool-girl casualness against the eagerness and grace of Lupita Nyong’o.

Jennifer has gotten a reputation in the media now of succeeding without almost any effort at all. She dislikes rehearsal, and would rather dash off a natural, impulsive read for a role than spend time researching and developing it. She never looks like she’s working hard at anything…Which is a big part of why watching Lupita is such a relief for me. Lupita doesn’t pretend she isn’t prepared, or didn’t expect this…She makes no effort to hide how thrilled and excited she is, but she remembers to thank everyone, because this was no accident. She wanted this moment and prepared for this moment, and no shame in that.

It might just be blogs drumming up hits, but the growing pessimism is catching on, seemingly out of nowhere. What once seemed geniune now looks contrived and calculated—with outlets like New York magazine asking if Jennifer Lawrence is “Katnissing us,” just another of Hollywood’s “trained fakers.” Does this remind you of anything? Rhiannon and Buchanan’s argument is the exact opposite of last year’s awards race—in which Lawrence was pitted against another fresh-faced actress: Anne Hathaway.

Before Oscar season, Hathaway was a media darling—earning the title of America’s Sweetheart and resident It Girl. But by the time Hathaway accepted best supporting actress for Les Misérables, she was labeled the “most annoying celebrity of 2013.” If you were confused about why anyone might dislike her, an aggregate post from BuzzFeed’s Louis Peitzman was happy to help you out, offering explanations like “her face,” “she looks stupid,” and “she ruins everything.” Slate’s Forrest Wickman suggested a simpler reason: sexism.

Take the idea, common among Hathaway haters, that she ‘tries too hard,’ or that, as noted feminist Howard Stern put it on Monday, ‘she’s overly dramatic.’ She’s too ‘chipper’ and is always ‘flittering around’ — like a little bird, apparently. The Daily Beast and Yahoo describe this aspect of Hathaway hate by calling her a ‘desperate theater girl.’ Can you imagine anyone calling, say, Hugh Jackman a ‘desperate theater boy’? Hathaway is an actor. Is she not supposed to be ‘dramatic’?

At the time, critics pointed to these perceived missteps as proof of Hathaway’s hate-ability, championing Lawrence instead as the breath of fresh air. As Anne Friedman pointed out in New York magazine, 2013’s Hathaway Hate “fit the broader cultural pattern…in which we simply don’t find successful, ‘perfect’ women very likable.” (Friedman called it the “Hilary Catch-22.”) But a year later, it’s Lawrence who has become the object of ridicule, precisely because she’s no longer the underdog. Where she was once lauded for her brazenness and honesty, Lawrence is now being criticized for comments referring to acting as “stupid” or constantly discussing her eating habits in interviews.

The problem is that Lawrence’s desire to be perfectly imperfect still isn’t good enough to live up to our impossible expectations of women in the spotlight. As Roxane Gay put it in a piece for The Rumpus, “Young women in Hollywood cannot win, no matter what they do.” Gay compares the Anne Hathaway narrative to Kristen Stewart, another young actress who went from a ubiquitous media presence to a cultural punching bag. Critics read into Stewart’s red carpet photos and see what they want, criticizing her “as too sullen and unappreciative of her blessings.”

Hollywood is filled with examples of former sweethearts people grew to hate—from Megan Fox to Katherine Heigl and Julia Roberts. Roberts was once America’s girl next door but, as Jezebel‘s Phoenix Tso put it, “people now speculate [she’s] a huge bitch.” And as Star’s 2013 Most Hated Celebrities poll shows, the penalties for perceived unlikability are much higher for women than men. Whereas Justin Bieber and Chris Brown, the latter a convicted abuser, ranked a paltry eighth and 20th, respectively; Heigl nabbed fifth place. Kristen Stewart was all the way up in second, and Gwyneth Paltrow won. What makes Gwyneth Paltrow 19 spots more hateable than Chris Brown? You tell me.

In a 2012 essay for the Huffington Post, I argued that the continual bashing of women sends a bad message to young women. I focused particularly on Kristen Stewart, a media pariah simply because she cheated on her boyfriend, as a terrifying example of our knee-jerk culture of lady hate. “I’m worried [girls] will be taught that it’s not okay to mess up, learn from it and apologize, because no one wants your apology, just your suffering on camera,” I wrote. “I’m worried [girls] will think this culture of bullying…and rhetorical violence against women is the norm.”

However, the case of Jennifer Lawrence is more insidious, proving you don’t need to actually do anything wrong to fall out of favor. You just have to fail to live up to impossible, ever-changing standards, expectations no one seems to place on fellow Oscar-nominees Leonardo DiCaprio or Matthew McConaughey. It’s not your grandmother’s sexism, standing in the way of someone’s right to vote. It’s the type of sexism that sets young women up to fail and then blames them for it, instead of blaming the culture that tells them they’ll never be good enough. Even when you win, you lose.

Like many people on the Internet, I don’t want Jennifer Lawrence to win Best Supporting Actress, either. I think it’s Lupita Nyongo’s time, and I’ll be crossing my fingers for her to break the Oscars’ habit of sidelining people of color. But my desire to see Nyong’o honored for her work doesn’t make me root against Lawrence. I recognize that criticizing Lawrence in no way fixes the broken system of the way we judge women, whether that’s on Oscar night or in real life. You can be the Cool Girl or the New Girl, but if we destroy women in order to celebrate others, no one comes out on top.