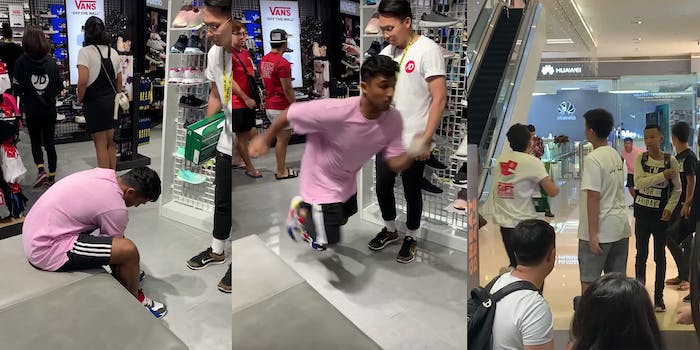 Harvinth Skin, a popular YouTube personality, recently played a prank on an employee at JD Sports that ended with the best case scenario: The employee got a raise.

Skin walked into a JD Sports store and was assisted by an unsuspecting employee, Martin Low. After trying on a pair of shoes, Skin broke into a full sprint for the door. Low valiantly chased after Skin, shoebox still in hand, before Skin turned around and ran back into the store.

Several social media users praised Low’s efforts, saying he deserved a raise for being a good sport about the prank.

Drops the shoulder, leaves the defenders in the dust… 😂👟💨 @harvinthskin pic.twitter.com/ubCEKRPu53

The prank even received a response from the CEO of JD Sports Malaysia and Singapore, Justin Lim.

“Stop scaring the staff,” Lim wrote with a crying laughing emoji. “And I think I need to have a word with my security guards.”

Low, who also sells street wear, was later awarded with a raise from Lim himself. Skin later said that he paid for the shoes and apologized to Low, who he said was nice enough to “not punch him in the face.”

Some on Twitter pointed out that this prank would be dangerous for people of color in the U.S., especially Black people. Black people are more commonly presumed to be breaking the law than their white counterparts.

Skin did not immediately respond to the Daily Dot’s request for comment.