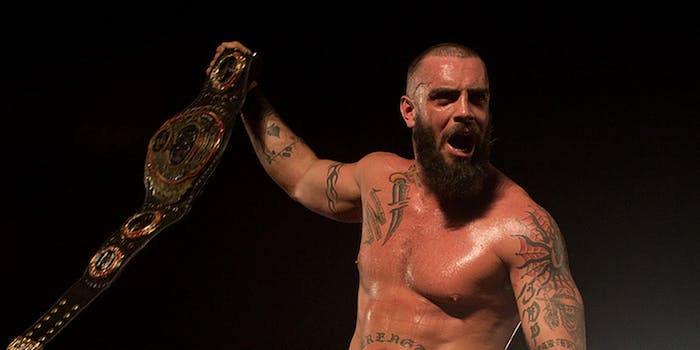 A pro wrestler deleted his Twitter account and agreed to donate his pay to charity and make a public apology after posting a violent threat regarding gay marriage on Twitter.

“The Delaware Senate passed a bill yesterday that allows same sex couples to get married. If that makes you happy, then congratulations!!!!!!,” Jay Briscoe, ostensibly the face of Ring of Honor (ROH) as its world champion, tweeted to more than 20,000 followers Wednesday.

He followed that with a second tweet: “… try and teach my kids that there’s nothing wrong with that and I’ll fucking shoot you.”

Followers and wrestling fans took exception to his remarks, calling him out on the violent nature of his tweets as well as calling him a homophobe. Briscoe, who has tweeted other homophobic comments in the past according to PW Torch, tweeted an apology later that night before closing his account.

In ROH’s middling first statement, it distanced itself from Briscoe’s remarks, saying it does not discriminate against fans and his comments don’t represent the views of the company.

ROH, viewed as the third biggest wrestling organization in the U.S., later said Briscoe would apologize and donate his pay from the next two events to an anti-hate charity.

Jay Briscoe would like to again express his sincerest apologies and regrets to all, especially his

young fans, for his recent hateful twitter comment. ROH has insisted that Jay also make a public apology at the ROH event this Saturday

night. Jay will address the public during the event.In addition to this apology, Ring of Honor and Jay have agreed