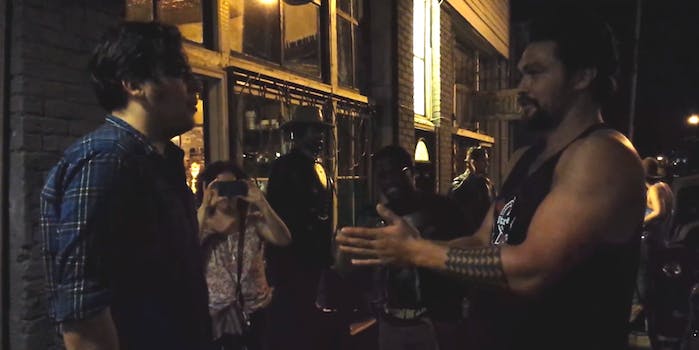 Why you should never, ever play Slaps with Khal Drogo

If you recall in Game of Thrones, Khal Drogo never lost a battle.

If you play the game of Slaps with Khal Drogo, you either win or (more likely) you end up in crippling pain.

Dustin Boyer, manager of the band Radio Birds, made that fateful decision Wednesday night when the Khal—er, Game of Thrones actor Jason Momoa—stopped by to shoot a music video with the group. Momoa was in the area shooting the film Road to Paloma, and he happens to be good friends with the band’s singer.

Normally, you’re not allowed to full-out dodge a move in Slaps, but Momoa plays by a set of different rules. It’s a mental and physical battle, and you can move to dodge the slap as long as you return to your original stance. And because you never know just when someone will strike, it can be pretty nerve-racking.

If you recall in Game of Thrones, Khal Drogo never lost a battle.

And after Momoa played Mercy with showrunner David Benioff during a drinking game at the Game of Thrones wrap party, Benioff ended up in the hospital with two shattered hands.

Boyer’s hands are visibly red in the video (despite the dark lighting in the video) and couldn’t move his hands when they eventually got back to work.

What’s even more insane is that Boyer agreed to a second round of Slaps with Momoa.

“My hands were bruised terribly,” Boyer wrote on Reddit. “In fact on the final one he actually misses my hand but hits my arm so hard my whole forearm bruised.”