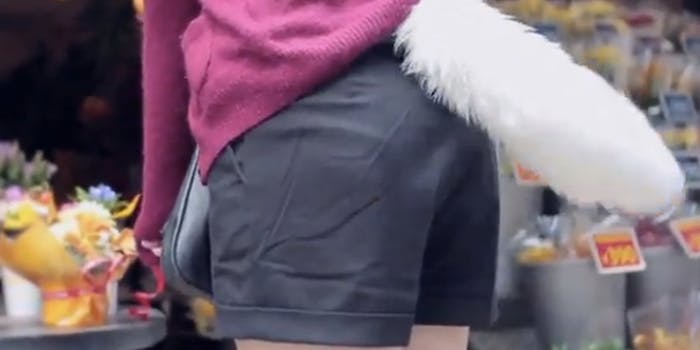 If you thought Google Glasses were the strangest way to use social media in public, guess again.

Shippo (Japanese for “tail”) is a brain-wave monitor and social media hookup ensconced in a furry white tail. Wearers update their social networks with their mood and location simply by thinking.

The tail works by using an electroencephalography (EEG) apparatus, the same technology used to detect seizures. Through this, Shippo determines whether a user is focused or relaxed. Focused users’ tails wag quickly, while relaxed users’ tails slowly sway. According to the concept video, a relaxed user will transmit a relaxed mood to her social networks.

It’s the latest test product from Japanese company Neurowear, a biosensor manufacturer that premiered in the U.S. this summer with Necomimi (a cute misspelling of nekomimi, Japanese for cat ears), a brain-wave reading cat ear headset. The concept movie for the headset has had 2 million YouTube views since March.

The ears debuted at San Diego Comic Con and, despite the $99 price tag, are becoming increasingly popular among anime fans and Japanophiles. This is likely since humans with cute animal ears are a Japanese animation trope.

Neurowear one-ups the ears’ technology with Shippo, however, by linking in to users’ social media and location information. Just how it does this is unclear so far, since the company has yet to release prototypes to the U.S. for testing, a Neurowear employee told the Huffington Post.

If it works, Shippo will let the people around you—both physically and online—be attuned to your every move. If there’s a more obvious way to channel your inner animal, we haven’t seen it yet.