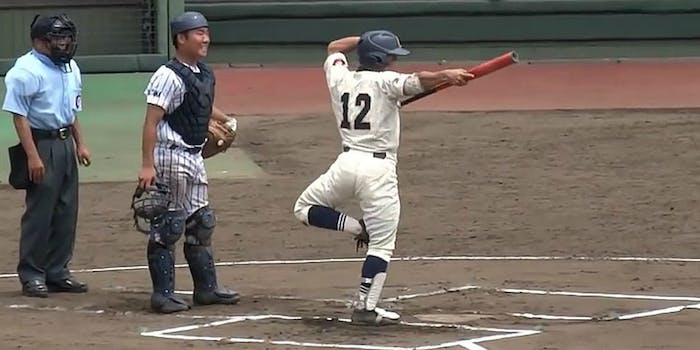 The best part of this video is that everyone watching treats it as normal.

Anyone who believes baseball is boring—with tons of downtime between innings that often produce no runs—should watch the video below and reconsider. There’s more going on in this clip of a Japanese high-school baseball player taking his at-bat than in many entire Major League Baseball games.

This kid’s approach to the plate is anything but boring.

Here’s another angle to the weirdness.

Though we don’t know the game situation, the batter—aside from his pre-pitch theatrics—is having a heck of an at-bat, fouling off pitches deep in the count and forcing the pitcher to work hard to claim him as an out. Though the batter grounds out to the right side of the infield, it appears as though he moved the runner, who had already stolen second base earlier in the at-bat, to third.

Job well done, sir, both in the completion of the at-bat and in everything that it entailed.