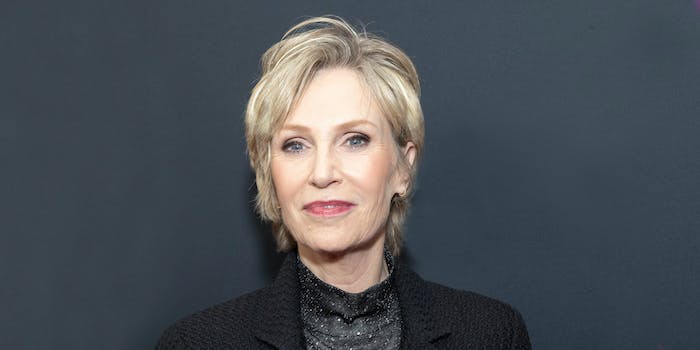 She preempted her thoughts by telling people she is a woman and loves women.

People have plenty of thoughts about the sound of women’s voices and whether they’re too high or too low, and while the conversation is often linked with sexism and the issue has institutional roots, Jane Lynch showed that sometimes women can perpetuate some of those ideals.

Taking to Twitter, Lynch preempted her thoughts on the pitch of women’s voices on podcasts with the fact that she is both a woman and someone who loves women. But for her, sometimes women’s voices get too high, so she offered women the tip to try lowering their voices.

“I love women. I AM a woman,” she said. “Our voices are higher than men’s voices. Women’s voices can get into the annoying area if it gets too high. If you’re doing a podcast, consider lowering your pitch a tad. If you think I’m being sexist about this then I don’t know what to do with you.”

Lynch doesn’t elaborate on what podcast or voices might have prompted her to tweet about the pitch of women’s voices. And, possibly sensing the backlash that her tweet would inspire for suggesting that women lower their voices, she pointed to the absurdity of calling her sexist for thinking it.

In follow-up tweets, Lynch shared a tweet linking to software used in post-production to adjust the pitch of someone’s voice and agreed with someone taking issue with Ben Shapiro. But, as Lynch’s tweet was shared, her preempting accusations of sexism didn’t stop people from calling out those views as sexist.

And, as tends to be the case whenever someone from Glee does something online, a few Glee memes popped up.

But it wasn’t necessarily a viewpoint that was wholly unpopular, as some people took to agreeing with Lynch.

When some women try to lower their voices so that they’re not criticized for being too high or shrill, they’re also criticized for going too low or producing vocal fry (which is when your voice registers low enough, it starts to sound creaky), something that listeners are often all-to-happy to let them know about. And although Lynch attempts to offer advice, however unwarranted it may be, a voice, for some woman, becomes damned if you do and damned if you don’t.

The Daily Dot has reached out to Lynch’s team via email.