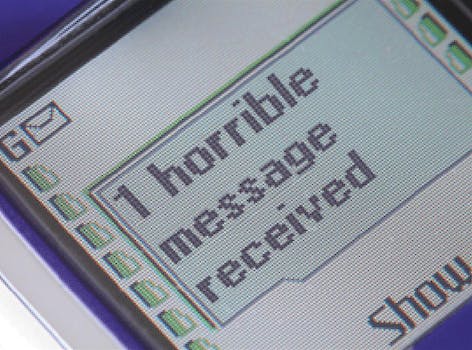 The last time I dated regularly, I didn’t own a cell phone. They existed, mind you, but texting hadn’t yet been invented, much less Angry Birds. Or whatever I’m supposed to be playing these days. Point being, if someone needed to tell me they had herpes, they generally had to say it to my face.

I’ve been on OKCupid for about 6 months now. I signed up mostly out of curiosity, having no clue what to expect. The data focus of the site (it matches you with people algorithmically according to keywords in your profile and questions you answer) and the fact that it seems to attract a younger, hipper crowd, made it more interesting to me than Match.com. It has now evolved into my primary form of dating, at times an obsession, at times an annoyance. I have met pilots and fire-eaters, bikers and lawyers, the extremely dumb, the extremely egotistical, one homeless person, one man I’m reasonably sure used to be a woman, and enough aspiring musicians to populate the orchestra of a mid-sized city. (I live in Austin, after all.) 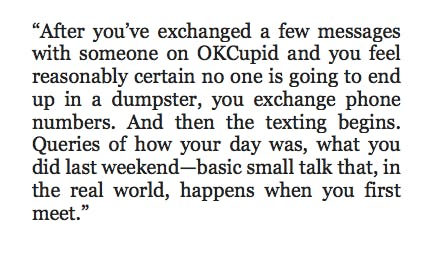 My contact list on my phone has blossomed into a veritable village of one-named suitors. Because in the 21st century all dating occurs via text. All of it. I mean, except for the obvious parts. (Though sometimes even those.) I dated one gentleman for over a month, seeing him quite often, and the only time we talked on the phone was the night we broke up. Coincidence? I think not.

The infusion of text messages into relationships changes the game significantly. It’s extremely easy to flirt via text. Unfortunately, with online dating, you find yourself flirting with someone you haven’t yet seen face to face. I can’t begin to describe how awkward it is to develop a familiarity with someone via text, only to discover you have zero chemistry in the real world. “Remember the veiled sexual innuendo in half of my messages? Just kidding! It turns out I find you rather distasteful!”

But I digress. We were talking about herpes.

After you’ve exchanged a few messages with someone on OKCupid and you feel reasonably certain no one is going to end up in a dumpster, you exchange phone numbers. And then the texting begins. Queries of how your day was, what you did last weekend—basic small talk that, in the real world, happens when you first meet. One of the biggest benefits of this mode of communication is that it can be a fairly good measure of intellect and wit. There are always those who don’t translate well from text repartee to face-to-face chatting but, generally speaking, it’s a good way to get a vibe.

One particular guy I encountered, let’s call him Henry, had a great vibe. For various reasons we ended up not meeting for two months, the entire time of which was spent texting almost daily. It was oddly romantic. Henry was very charming, witty, and, I knew from pictures on the site, very attractive.

We finally found a time to meet. Would our great text rapport translate in person? I was nervous as hell. I changed outfits three times. I did thorough examinations of my teeth and pores. And yes, I shaved my legs.

The date was fantastic. We talked nonstop, made each other laugh, had thought-provoking conversation. It was a home run. I was confused by the chaste kiss we exchanged at the end of the night, as he’d been something of a big talker in our texts. But whatever. I woke up with a grin on my face the next day. I was so excited to see him again!

You see where this is going, right?

The next evening, after flirting with each other outrageously on text all day, my phone buzzed in a crowded restaurant, delivering this potent and concise message: “I have herpes.”

Oh. Well, that’s fun. That’s inordinately entertaining. Dear Henry, I’m so thrilled you waited until two months of conversation had passed—two months!—before you revealed this.  You spend large amounts of time wooing me, only to leave out the fact that you have an incurable STD? Well played, sir. Where may I buy a gold band and white dress?

Don’t get me wrong, I give him credit. I thank every god in every heaven that he did this well in advance of any sexual encounter. He was decent enough to be hesitant about even kissing me. This could have ended up so much worse. But still.

It’s funny, I know. It’s amusing to peek into a world you may not know much about, especially one in which so many human foibles are on display. There are some hilarious aspects to online dating, without question. But there are also painful ones unique to a community in which all the participants put their heart on the line. I liked Henry. We connected, and that doesn’t happen everyday. After the Great Herpes Text Reveal, I sort of even went through five stages of grief, with heavy emphasis on the anger cycle and an extra stage of “massive googling expedition to find transmission rates” thrown in.

Don’t worry. I won’t get maudlin on you every time. As your Jane reporting back from the front lines of online dating, I plan to share more bizarre stories about this singular part of my life. But I think it’s important to point out: all the witty profile posturing and engaging pictures in the world can only cover our humanity temporarily. Everyone online is flawed, sullied, or damaged. Just like everyone in life itself.

And yes, he’s still texting me. Am I writing back? I’ll leave you to wonder.