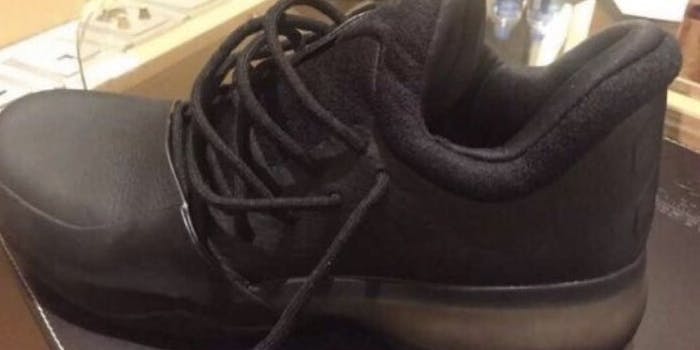 It's the Curry 2 Low all over again.

Earlier this year, NBA MVP Stephen Curry’s signature Under Armour shoe, the Curry 2 Low, became the laughingstock of Twitter. It was just so pedestrian, so middle-aged, so… white.

But could another shoe be lamer? Sadly for Houston Rocket and former Kardashian konsort James Harden, the answer is yes.

Finally Harden makes a basketball shoe for me, a waiter at Chili's. pic.twitter.com/Etw6Ihl0bQ

Twitter is ideal as a platform for roasting bad shoes to a crisp—even if Harden’s look like they come pre-roasted. There was the Curry 2 Low fiasco, of course, but there was also the 8-month mocking of Jon “@fart” Hendren’s horrible Vans. And just when you think it’s over, his friends start it up again.

Now Harden’s shoes are getting it from all sides:

Xzibit was wearing James Harden's shoe when he got roasted by Eminem in 8 Mile pic.twitter.com/qXB8cqrMBi

James harden really made sneakers for grandpa Joe from Charlie and the Chocolate factory pic.twitter.com/zo8M0vdOoG

Harden: I want to the Internet to roast my shoes worse than it did Steph's shoes
Adidas: say no more pic.twitter.com/JFSTybadS7

A few points in Harden’s defense, though: First, this is allegedly a leaked photo, so maybe the real shoe will be better? Second, Harden is an inveterate troll on the court, and therein lies his basketball genius. Maybe the shoes are just a really good joke, just seeing how ugly he can make something and still get people to wear it?

Third, and most important: Those Curry 2 Lows? The ones everyone on Twitter was mocking as ugly shoes for old dads? They were a huge success. In fact, they sold out.

“Under Armour was playing a different game than Adidas or Nike,” Esquire posits. “The company wasn’t trying to be cool; it was trying to move product. The Curry 2 low wasn’t stylish then, and it isn’t now. But that’s not the point—and that’s exactly what the haters missed.”

Maybe Adidas is playing that game, too. And who cares if the Hardens mostly end up on the floor at Applebee’s, as long as they sell?