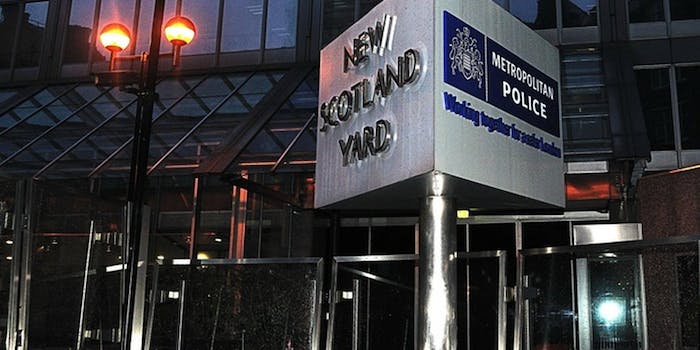 In Britain, watching the Foley video could be a ‘terror offense’

"Viewing, downloading, or disseminating extremist material within the U.K. may constitute an offence under Terrorism legislation."

In the aftermath of American photojournalist James Foley’s murder by an Islamic State (formerly ISIS) militant, the British Metropolitan Police have warned that even “watching” the widely disseminated and graphic footage could “constitute an offence under Terrorism legislation.”

The video (which the Daily Dot has decided not to link to) was initially uploaded to YouTube and was taken down swiftly—but not before igniting a fierce debate over the ethics of sharing such footage. British news presenter Krishan Guru-Murphy urged readers not to view or share the footage, arguing that “the whole reason Islamic State (IS) and Al-Qaeda film murders and distribute them online is to spread fear… So spreading a video, or even watching it yourself and telling people about it, is simply doing exactly what IS and Al-Qaeda want. It is, in effect, helping them.”

The New York Post and New York Daily News, meanwhile, took an opposing view, with both newspapers running stills from the footage on their front pages on August 20.

Now, the Metropolitan Police—responsible for law enforcement in Greater London—has announced it is investigating the contents of the videos. Individuals who have watched the video report that the IS “executioner” speaks with a strong London accent—something that experts say was almost certainly deliberate. “They clearly wanted someone who spoke English because they wanted it to create maximum impact, especially in the U.S.,” Prof. Peter Neumann from King’s College London told the Guardian. “They want this to have maximum impact on the west and for parts of it to be streamed on American television networks they needed an English speaker, so it was more about the English language than the nationality.”

The Metropolitan Police is going further than just investigating any potential British connection, however: In a statement, they say they “would like to remind the public that viewing, downloading, or disseminating extremist material within the U.K. may constitute an offence under Terrorism legislation.”

If their interpretation of the law is valid, any Briton who watches the video could be liable for prosecution, sparking immediate dissension online.

(They’re new to the internet) RT @Fhamiltontimes: Scotland Yard: even viewing the James Foley video might constitute a terrorism offence

I didn’t want to view the Foley video, but fucktard Nazis at Scotland Yard saying I’m a terrorist if I do watch it means I probably will.

The social networking site Twitter has taken a stand against sharing the footage of Foley’s killing, and is suspending the accounts of those that tweet graphic photos or videos. James Foley’s wife, Kelly Foley, also took to Twitter to ask that people do not share the footage. “Please honor James Foley and respect my family’s privacy,” she wrote. “Don’t watch the video. Don’t share it. That’s not how life should be.”

It’s a position shared by many:

Remember James Foley as he lived, not as he was murdered: pic.twitter.com/4hCwOepCuc

This Is How We Should Remember James Foley http://t.co/R1Y4SWJ6M5

Foley was kidnapped whilst working in Syria in 2012, and had worked as a journalist throughout the Middle East. He was also held captive for 44 days in Libya in 2011, whilst covering the civil war.

James Foley speaking to the BBC in 2012 about the importance and risks of frontline reporting.

The U.S. Department of Justice did not respond to the Daily Dot’s calls for clarification about American law.