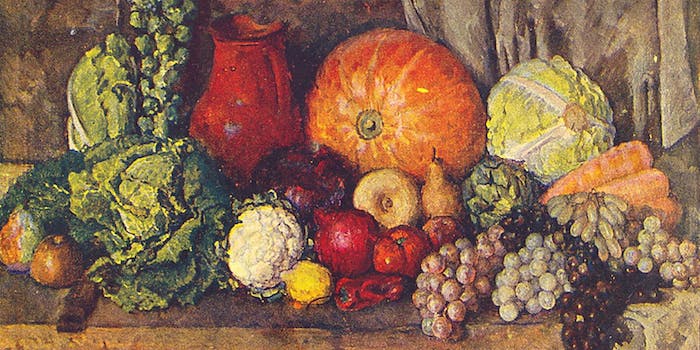 Some memes, like Distracted Boyfriend, don’t require prior knowledge to get the joke. You can look at the stock photo of a man checking out another woman while with his girlfriend and understand exactly what’s going on. But other, more bizarre memes on the internet are incomprehensible if you’re unaware of how they began.

Last week, I came across one of these memes: “James Barrett’s wife.” The meme uses object labeling to show the wife of a man named James Barrett doing things like hitting or throwing a “vegetable artist” off a cliff while saying “fuck off.”

If you’re confused, keep reading. This meme makes a lot more sense once you’ve seen the Facebook Messenger screengrab that started the joke. A woman named Daniella Gay received a message from the James Barrett in question on a Friday night. He asked, “What are your plans this evening.” (He didn’t include a question mark. Keeping it casual!)  She responded, “Draw vegetables.” The next response from Barrett arrived at 3:55am. It read: “Hey. Just to let u know. Im james barretts wife. Fuck off.”

Gay posted the exchange on July 28. Soon, the comment thread was filled with memes about James Barrett and his wife.

In the comments of the viral tweet, people posted more “James Barrett’s wife” memes. They are all pretty good.

So who is James Barrett? Why was he sending messages to a vegetable artist (and meme maker) on a Friday night? In a Facebook message, Gay told me that Barrett is “some rando” who likely found her through a mutual friend. Gay gets a lot of weird messages from strangers on Facebook, she said, and she responds to them in bulk.

When Gay got the message from Barrett’s wife, it was 4am, and she was at a friend’s house. She read the conversation out loud and everyone “begged” her to post the screengrab, she said. “Noticing it got a lot of traction, I made a bunch of memes about the scenario” and posted them in the comments.

“Overnight, I had 2,000 shares and thousands of likes on the memes,” she said.

Now, there are “James Barrett’s wife” memes all over the internet.

Gay also created a private Facebook meme group, called “artisan vegetable enthusiasts,” so that people could have a place to continue sharing memes about James Barrett, his wife, and vegetables. The lead image for the group shows a stock photo of a bunch of colorful vegetables with the text: “fuck off lol.” The group has more than 4,000 members.

To join the group, you must answer two questions: “Are you James Barrett’s wife?” and “Do you endorse vegetable photography, artistry, and other veg media?” If you answer correctly, you’ll be accepted. And then you’ll get to see memes like this:

Naturally, someone posted a Distracted Boyfriend version of this meme in the group: