This is a new low for lawyers.

On Tuesday, David Cornwell, Jameis Winston’s lawyer, sent out a tweet that named the person accusing Winston in his sexual assault case and pending code of conduct hearing.

The tweet, which has been retweeted more than 300 times and is still on Cornwell’s Twitter page, reads, “FSU gives [the accuser] 20 months to file a complaint and Jameis 13 days to learn 1,000 documents. #dueprocess??” The Daily Dot has decided not to reprint the accuser’s name. 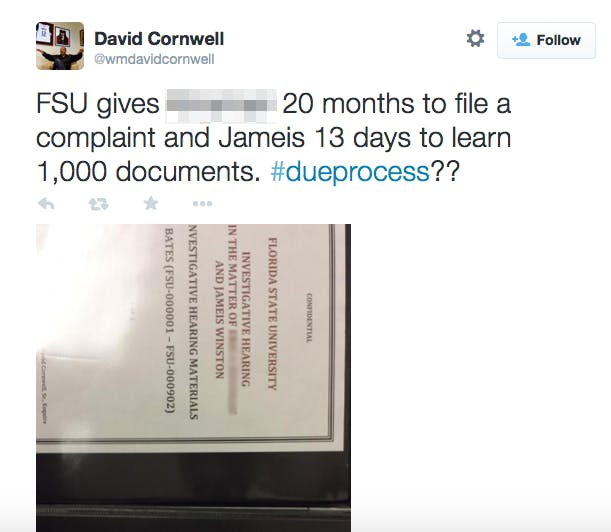 The 13 days referenced in the tweet are the days left before November 17, when Winston’s student disciplinary hearing is scheduled.

As a matter of practice, media outlets, law enforcement agents, and attorneys generally refrain from publicizing the names of victims or accusers in sexual assault cases. Yet while Cornwell’s behavior was inappropriate and ethically suspect, it probably wasn’t illegal.

In an interview with AL.com, Cornwell stated, “There’s a confidentially condition in Title IX matters that pertains to both parties. Patricia Carroll [one of the accuser’s attorneys] did a press conference and put [Jameis Winston’s] name out there.”

Cornwell is essentially claiming because his client’s name is out there, it’s fair to level the playing field.

According to the Orlando Sentinel , Cornwell has publicized the accuser’s name on multiple occasions, while arguing that he is well within his right to do so, since “her claims have been proven unfounded by the state attorney’s decision not to pursue charges [against Winston].”

In reality, Florida state attorney Willie Meggs chose not to pursue charges after an investigation concluded that there was not enough evidence to secure a conviction. This does not reflect on the legitimacy of the accuser’s claim.

There is also the issue of the Tallahassee Police Department waiting 11 months before referring the sexual assault allegation to the state attorney’s office. Tallahassee police have been accused of mishandling Winston’s case as well as several others involving football players , a concern that has led to widespread criticism and even a petition demanding an investigation of the police department.

By naming Winston’s accuser, David Cornwell opens her opens her up to public scorn and scrutiny. His critics have accused him of trying to intimidate the accuser into silence. The accuser has already been subjected to vitriolic victim-shaming on social media and on campus, where the man accused of assaulting her is the Heisman-trophy-winning quarterback and the leader of a championship football team. A victim is unquestionably less likely to come forward and participate in an investigation if he or she fears that doing so will lead to public harassment.

In a statement to AL.com, Kathy Redmond Brown, the founder of the National Coalition Against Violent Athletics, called Cornwell’s tweet a “sleazy tactic.”

“He didn’t need to tweet out anything,” she continued. “He could have just said due process. A defense attorney taking to Twitter is about as reckless as their defendants taking to Twitter. Anybody who knows about rabid fan bases like Florida State knows that any time you call out someone like that and put her name out there, you are basically throwing her to the wolves in hopes she backs down. You are basically hoping she drops everything. It’s a sophomoric approach to law. It’s a very desperate attempt to get her to drop all that she is doing. It’s an affront to rape victims.”

The accuser’s attorney John Clune responded to Cornwell action’s by opining , “Mr. Winston’s lawyer apparently likes to bully people and he has spent great efforts to get her name out there. That kind of intimidation tactic isn’t going to get him very far here.”

Clune also addressed the accusation that the process has been unfair to Jameis Winston. “Both parties got the same materials at the exact same time,” Clune said. “A school’s Title IX obligations to investigate are triggered by learning of a report of sexual assault which happened almost two years ago in this case. If Mr. Winston has concerns about why the process took so long, a delay that kept Mr. Winston playing football, he can take that complaint up with Florida State.”

Retired Florida Supreme Court Chief Justice Major Harding will oversee Winston’s hearing on November 17th. If he is found guilty of violating any FSU code of conduct provisions, Winston faces 15 possible sanctions, including verbal reprimand, probation and a ban from competing on athletic teams, and expulsion.