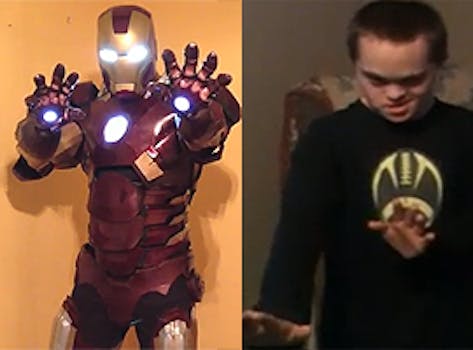 Thanks to r/cosplay and r/RandomActsofChristmas, Iron Man granted a huge fan the holiday of his life.

The moderators of r/RandomActsofChristmas probably anticipated having their hearts warmed several times over by all the redditors who go out of their way to donate their time, energy, and pocketbooks to making Christmas a little brighter for children and other members of the community.

But they probably never expected that one of those redditors would be Iron Man, or that the superhero—or at least one cosplayer—would warm everyone’s hearts this holiday season.

In November, mod Pookie85 posted a request to the r/cosplay subreddit looking for someone to play Iron Man for a special kid:

I am hoping to find an Iron Man Cosplayer near Southeastern Kentucky who could visit a little boy named Cameron. He has down syndrome. He’s a sweetheart and loves Iron Man.

If we can’t find one who can come to KY, then I would like to find one (with an awesome costume) who could make a video and say hi to him, as well as wishing him a Merry Christmas.

We do our best to make the Christmas Magic happen for kids all around the world. This is our second year running. This little guy did not ask for toys, just a visit from his hero. So if you know of someone who cosplays as Iron Man, please let me know! Thank you!

After being flooded with offers from Iron Men across the forum, Pookie85 made a decision and contacted Redditor MartyJMcFly, who, in true Iron Man form, promised he’d “make it happen.” Pookie85 sent MartyJMcFly a customized Iron Man a script personalized for Cameron and his family, and make it happen they did, in a video where Iron Man congratulates Cameron on being such a great kid and promises to put in a good word for him to “the big guy” at Christmas:

Even better was Cameron’s reaction, full of smiles from a boy who, according to his father, typically doesn’t emote:

Afterwards, Cameron even made a reaction video to wish Iron Man a merry Christmas in turn, looking delighted and showing off his skills:

Random Acts of Christmas truly does try to give every child what they want most for Christmas, and we were able to accomplish that for Cameron.

Redditors reacted with nearly universal praise, and in many cases, tears—proving, as if we didn’t already know, that Iron Man, Reddit, and Santa Claus make a great team of superheroes.