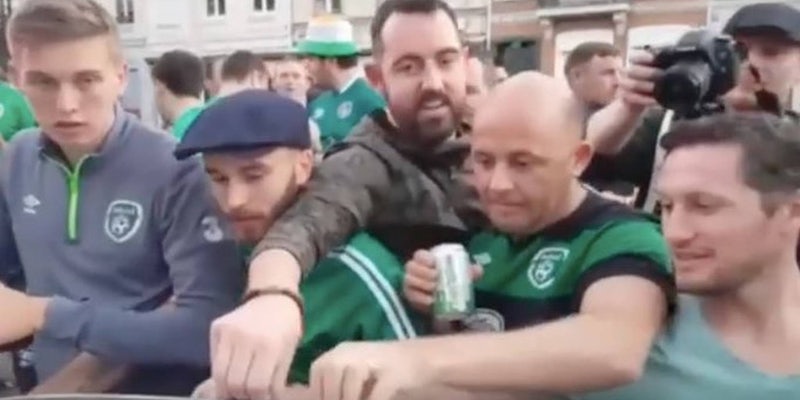 It’s going down in Lille this week, as Irish soccer hooligans flood into France to watch their team compete in the UEFA Euro Cup. As befits Irish fans’ reputations, they’ve left the French city in alcohol-soaked ruins, crumbling every building in their wake after Ireland’s 1-0 defeat of Italy.

After a boisterous drummer accidentally dented the roof of a parked car he was standing on, the good green boys immediately rallied to pay for repairs. They apologetically stuffed cash through the windows before determining they could fix the roof themselves, by hand.

So they did, banging out the dent without a moment’s pause in their celebration.

It looks like this’ll be the theme of Ireland’s Euro campaign this year: Earlier in the tournament, another group of extremely polite Ireland fans chanted “please don’t start a riot” at a group of England supporters.

At least one commentator has argued that Ireland’s fans being so conscientious is a “subtle form of anti-Englishness,” and that Ireland should be out there patriotically rioting alongside England fans.

“If we truly were the pluralist and mature nation that we aspire to be, then we would not be out cleaning the streets of Bordeaux but we would instead by standing shoulder to shoulder with our English cousins lobbing chairs and throwing punches at the Russian enemy and getting tear gassed by the police,” wrote Francis Revisionist on Balls.ie.

This an excellent troll.

So Canadians are good-guys? Here are some Irish football fans fixing a dent.

Ireland advances to play France in the next round, so perhaps this love from the locals will be short-lived.