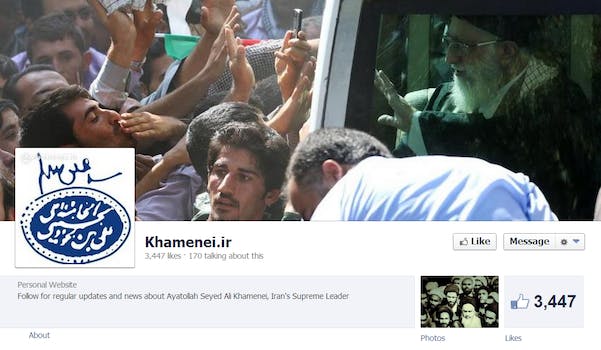 Despite the Iran's building of a “halal” Internet, Ayatollah Khamanei has reportedly joined Facebook.

In the social media equivalent of the punk rock episode of “Quincy,” the Ayatollah has joined Facebook.

The Ayatollah in question, of course, is Ayatollah Khamanei, the “Supreme Leader” of Iran and inheritor of the mantle of the Islamic Revolution in that country.

Despite the country’s building of a “halal” Internet and preparations to cut off the rest of Iran’s access to the profane Web, there are apparently either enough Iranians accessing the blocked Facebook anyway to warrant his inclusion, or the Ayatollah wants to present his smiling face in an easily friendable manner to the world at large. Probably a combination of the two.

Since joining Facebook on Dec. 13, the Ayatollah, or his Web lackeys, have posted an old photo of him in the company of the father of the Islamic Revolution, Ayatollah Khomani, posted from Instagram, presumably to give it the tint of authenticity. A contemporary photo of the Ayatollah shows him riding in a Iranian revolutionary Islamic equivalent of the Popemobile. The Ayatollamobile? (The Pope is another religious reader who recently threw his hat into the social media ring.) There are several other graphics posts, some of which are text-only.

Iran is second only to China in its enthusiastic, enduring, and skillful control over the Internet it allows its citizens to officially see. Much of the current blocking and the new “clean” Internet it is rolling out is a function of how much social media was used during the ill-fated Green Revolution surrounding the country’s 2009 elections.