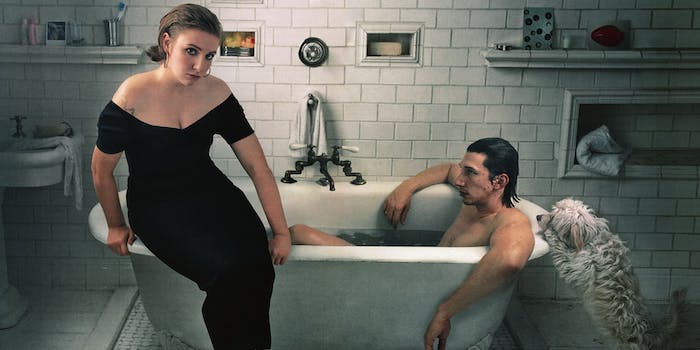 Lena Dunham’s recently released memoir, Not That Kind of Girl, has stirred up a lot of controversy, and probably not the controversy that Dunham hoped to stir up.

Several passages in the book detail the Girls creator and actress’ childhood sexual experimentation with her sister, Grace, who is six years younger. After a conservative writer quoted the passages and accused Dunham of sexual abuse, the internet exploded.

Not all of Dunham’s critics have been conservative columnists, however. Many women, especially women of color, have been active on Twitter, discussing the passages and how they exemplify the abuse that others have faced in childhood. These critics have started a hashtag called #DropDunham, calling on Planned Parenthood to end its partnership with her:

.@PPact you have your own sexual assault hotline and services. The face of your org should not be a sexual predator. #dropdunham

#DropDunham because having her as a face of anti-violence & “feminism” validates, excuses, dismisses, and encourages her predatory behavior

In ‘Girls’ Dunham labeled the rape scene as a “misunderstanding between the 2 characters.” This is textbook rapist defending. #DropDunham

Meanwhile, others think there’s nothing wrong with Dunham’s actions:

My little sister and I took baths together until we were 5 & 6. Pretty sure we examined each other’s junk closely. Sheesh. #LenaDunham

@FatBodyPolitics that’s where we disagree. I think her memoir is intentionally uncomfortable. “Normal” or not, I don’t think it’s abuse

if yr denunciation of Lena Dunham for being an “abuser” includes transparent envy of her career and privilege, you MAYBE invalidate yr point

In response, some critics have pointed out that racial privilege may play a role in how Dunham’s behavior is perceived. In a post for her blog, writer Luvvie Ajayi explains:

A black woman could not have written what Lena did. She would not have the space to argue context. She would not have anyone championing her. She would certainly not be given some benefit of the doubt about childhood exploration because black people’s innocence is often denied, even when we’re 7. Our kids are tried as adults in the court of public opinion and in the court of law. In fact, NO person of color could have written this. Meanwhile, Lena seems to be above critique for many, and that might even be why she thought these problematic occasions should have been included in her book.

Did Lena Dunham abuse her sister? That depends on a lot of things, some of which we may not know without getting more information. However, there are a number of things about Dunham’s behavior as she describes it herself that bring up red flags.

First of all, I’ve seen a lot of conflation online between what Dunham describes in her book and what’s referred to as “playing doctor (i.e., children exploring their genitals together). However, there are some important distinctions between these things. When children engage in “normal” genital play together, they are usually of similar age and are both/all willing participants. While this type of play may alarm adults, child psychologists seem to agree that it’s a normal part of maturation for many children. It’s crucial not to demonize these early expressions of sexuality or shame children for having them.

However, Dunham and her sister, Grace, have a six-year age gap, and Grace Dunham was just one when her older sister started “experimenting” with her—hardly old enough to say, “I’ll show you mine if you show me yours.” And had Lena Dunham merely confessed to touching her sister’s vagina, we may be having an entirely different conversation. But it wasn’t. As far as I can tell from her own words, she bribed and coerced her sister into engaging in these activities with her and attempted to manipulate her emotionally by forcing her into a position of dependence:

As she grew, I took to bribing her for her time and affection: one dollar in quarters if I could do her makeup like a ‘motorcycle chick.’ Three pieces of candy if I could kiss her on the lips for five seconds. Whatever she wanted to watch on TV if she would just ‘relax on me.’ Basically, anything a sexual predator might do to woo a small suburban girl I was trying… What I really wanted, beyond affection, was to feel that she needed me, that she was helpless without her big sister leading her through the world. I took a perverse pleasure in delivering bad news to her—the death of our grandfather, a fire across the street—hoping that her fear would drive her into my arms, would make her trust me.

In addition, after she learned that her sister is a lesbian and became upset about it, Dunham outed her to their parents.

While the conversation that Lena Dunham and her defenders are trying to have keeps focusing on that single story about the vagina and the pebbles, Lena Dunham’s critics seem to be much more concerned with the fact that some of the behavior she described sounds a lot like the things abusers do to reduce the likelihood that their victims will feel able to leave or tell someone about the abuse. While this doesn’t in and of itself mean that Dunham abused her sister, it’s a legitimate thing to be concerned about.

These are all things that children are capable of doing. Just as children can bully and physically hurt each other, they can also manipulate and coerce each other, including sexually. At least a third of child sexual abuse is committed by minors (though most of them are adolescents), and the intent doesn’t necessarily have to be violent or threatening. According to a brochure created by Stop It Now, an organization that aims to prevent child sexual abuse, “Children as young as 4 or 5 may unknowingly engage in sexually harmful behavior.” As they get older, it may not always be clear to what extent they understand that they are doing something wrong. (I strongly recommend reading that entire brochure for some useful background information about child sexual abuse by other children.)

As for Dunham’s intentions and understanding of right and wrong, only she knows. And maybe even she doesn’t. Her mother was at least partially aware of what was going on and did not, at least not by Dunham’s account, try to discuss this with her daughters. How else can a child learn that she is doing something deeply wrong?

What disturbs me far more than anything Lena did as a child are the things that she says about it as an adult. From the start of this whole controversy, Lena Dunham and her supporters have dismissed this as a “right-wing news story.”

Feminism is allying with misogynist transphobic right-wing bigots and telling other women to shut up and sit the fuck down. Cool.

While it’s unfortunate that the outlet that broke this story almost certainly had an agenda beyond “informing folks that coercing one’s little siblings into sexual play is a bad thing to do,” I also have to wonder where all the liberal reviewers of this book were on this issue. Did nobody notice? Did this seem like just “being a weird 7-year-old?” (By the way, Lena Dunham says in her book that this continued for a while after that, though she didn’t specify how long.)

Dismissing the idea that Dunham may have mistreated her sister simply because that opinion was first expressed loudly by a conservative writer is the definition of an ad hominem argument. That a conservative writer said it has no bearing on whether it is true or not, because the relevant passages are, rather than being “taken out of context” as Dunham’s defenders keep suggesting, available for anyone to read should they choose to. And, as they say, even a broken clock is right twice a day.

Agreeing that Lena did a very bad thing does not mean, as some claim, that we must send her to prison and hate her forever. I do believe that abusers—if Lena is one—can change. Children especially should not be judged forever by what they did when they were too young to know better, perhaps because no adult taught them better. However, in order for people to be forgiven for doing bad things, they have to actually acknowledge what they did and apologize for it. Had Lena’s memoir depicted these events differently—for starters, by discussing them as serious maltreatment rather than charmingly lovable quirks—perhaps critics would have come to a different conclusion.

Some people also claim that because Grace Dunham has not named her sister’s actions as abuse (or as harmful or damaging), we should not call them that, either. In general, I don’t think we should ever argue with someone who is saying that they were not abused (or raped, or hurt, etc.). However, Grace Dunham has not made any statements about this as of this writing, except a series of vague tweets that seemed to be criticizing her sister’s critics without actually exonerating Lena Dunham. Assuming that Grace Dunham was not harmed by her sister’s behavior is no better than assuming that she was.

In fact, it may even be worse, because victims of abuse (or even maltreatment that cannot be classified as abuse) very rarely state outright that they were abused and hurt by that experience, especially not if they are still involved with the person who did it. Grace Dunham may also not believe that what happened was in any way wrong or abnormal, because it seems that others in her family did not believe that either.

Regardless, her view of her own experiences should be respected, which is why I wonder whether or not Lena Dunham got her sister’s consent to discuss these things in her memoir—and I worry that she didn’t. After all, she didn’t get her consent to out her to their parents, either.

But ultimately, it’s not just about Lena and Grace Dunham. It’s about all children who find themselves the targets of sexual experimentation by older siblings—and how we respond to their claims and their abusers’ claims. If the response is, “But that’s just normal kid stuff! Who didn’t do that?”, then children get the message that there is nothing wrong with what happened to them.

I am not interested in defining anyone’s experience for them. For me: someone was “curious” and it fucked me up for about 25 years.

Think about all the little girls and little boys in situations just like mine. You just told them you don’t believe them.

That Grace Dunham may not consider this abuse does not mean that others wouldn’t, or that her sister’s behavior was okay and acceptable. Abuse is defined not by the intent of the perpetrator or the actual harm done to the survivor, but the lack of consent, the potential to do harm, and the tactics used—gaslighting, coercion, creating dependency, and so on.

Whether or not we label Lena Dunham a sexual abuser, we need to be able to say that some things are not OK to do to someone else without their consent, regardless of your age. The things Lena describes in her book fall squarely into that category.