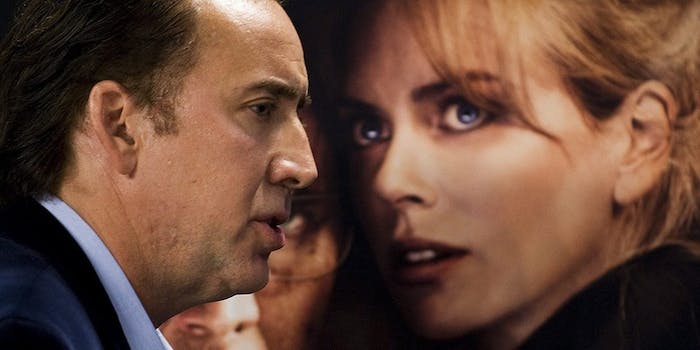 People don’t make sense a lot of the time, but GIFs do.

He named his son after Superman. He was actually supposed to play Superman in a Kevin Smith-penned film that would have been directed by Tim Burton and see him covered in LED light tubes, but it didn’t quite shake out. He once owned a castle, until he had to sell it for the purposes of honoring debt. He may or may not have been alive since at least the Civil War. He’s part of one of American cinema’s most prolific, lauded families but has downplayed this for some time now. At different points in his career he’s been a sex symbol, an Oscar-winner, a VAM-PIYAH, a punchline, a cult hero, a pachinko salesman, a symbol of Hollywood downturn, and a consummate leading man.

He’s Nicolas Cage, and he might be the Internet’s favorite actor.

That’s not to say that Cage has become the subject of a million and one BuzzFeed lists ala Ryan Gosling or a worldwide object of lust in the way Michael Fassbender has, but rather that Cage’s entire star persona lends itself to the way the Internet absorbs and engages with pop culture. Somewhere in the past decade, the memeification of Nic Cage began, and since then there have been an innumerable number of macros reminding you that he’s going to steal the Declaration of Independence or that few actors have ever been able to convey unabashed rage and madness in quite the same way that he does.

If we might attempt to pinpoint an exact moment when Cage became the star of the Internet, it might be helpful to start in fall 2007, when Neil LaBute’s woefully ill-conceived remake of The Wicker Man hit theaters. The film itself would be an eminently forgettable supernatural thriller, were it not for Cage’s relentlessly committed, gonzo performance. In fact, it’s a performance so wild that the YouTube montage of its most outlandish moments has 4.2 million views:

And in the wake of that gem came a similar, but more comprehensive, retrospective video, titled “Nicolas Cage Losing His Shit”:

What’s strange is that, in the seven years since The Wicker Man flopped in theaters en route to cult immortality, these videos and the scores of others like them have dramatically changed the way in which we as a movie-going public perceive Cage’s career. Granted, his recent spate of straight-to-DVD offerings (Rage, Trespass, Stolen, etc.) haven’t helped in this regard, but Cage is now seen less as an eccentric movie star than as a latter-era Bela Lugosi figure, a furious performer whose oddball work warrants ironic appreciation instead of genuine affection.

For many, it’s not his aforementioned Oscar-winning performance in Leaving Las Vegas, his iconic turn in Raising Arizona, or even the successful National Treasure franchise that comes to mind. It’s the idea that a Cage performance denotes a certain level of camp, that it’s the kind of movie that you can put on while getting intoxicated with friends and have a field day watching. It’s why earlier this year, a picture of Cage wearing a T-shirt with his own face from Vampire’s Kiss and hanging out with Andrew Dice Clay made the viral rounds. It’s why this week, we’re talking about a Halo mod that replaces most of the characters with Cage’s face. He’s less an actor at this point than an inside joke that the whole world gets to share.

But to do this, reducing the whole of a performer’s body of work to a series of ironic gags, is to do a disservice to the reason people gravitated to him in the first place, whether as a leading man or a subcultural icon. There’s a relentless commitment to his work that makes him both a perfect target for an Internet world that thrives on a general lack of context and one of pop culture’s more interesting figures. Culture Mass’ Cameron Cook speaks to this viral tendency. “Because people are encouraged so heavily to instantly comment on everything around them, it’s common for the negative opinion to get easy traction,” Cook argues. “Cage became a prime target right as this culture was born, and it’s the unfortunate timing that has perpetuated his status as a cult icon of bad performance.”

This is the tricky thing about viral culture: it’s impossible to know how many people are laughing alongside Cage and how many are simply content to sit back and laugh at him, because the line between the two is blurrier than ever before. People who’ve never even seen his Wicker Man turn shout “No! Not the bees!” at one another, and whether or not they’ve seen his equally odd but stellar turns in fare like Adaptation or Werner Herzog’s Bad Lieutenant: Port of Call New Orleans is beside the point. He’s no longer an actor; he’s a living meme.

This is a disquieting indication of how we as a culture have come to view eccentricity at large. Rather than ignoring or marginalizing it as in past eras, we embrace it with open arms, but always with a certain ironic distance. It’s okay to know of Cage’s work, watching it with one foot firmly planted in the camps of sarcasm and snark, but a genuine appreciation of it requires further argument. And at times, even the genuine enjoyment of something truly unusual becomes its own form of social posture—in which post-irony is every bit as much a declaration of the self in pop culture as irony. We’re through the looking glass now, where liking and disliking things as terminal states largely ceases to exist. To do either of those things is to fit into one of a hundred different sub-categories, all of which barely resemble enjoyment or disdain.

Cage is at once the quintessential performer for the Internet era and one who’s largely been done a disservice by it. Rather than honoring the furious lack of inhibition that characterizes most of his best and worst performances alike, audiences tend to view him through hip detachment. It’s a tendency that’s nowhere near exclusive to Cage; consider how we talk about Kanye West—or other successful and talented people that can’t be immediately and easily understood. Despite the fact that more people get to have more to say than ever before, we’re actually saying less, creating ever more elusive spheres for celebrities, and ourselves in relating to them. People don’t make sense a lot of the time, but memes do.

Photo by Heather McCall/Flickr (CC BY 2.0)