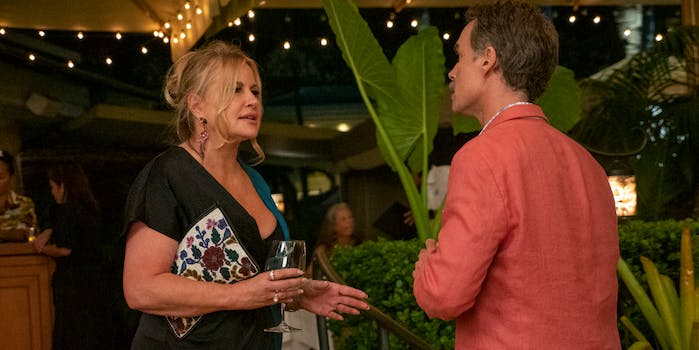 This week on the internet: ‘White Lotus’ memes and Alabama Rush TikToks

‘The White Lotus’ memes are getting us through August

The news has been bleak. COVID-19 cases are rising, kids are returning to school while politicians fight over mask mandates, and people are fleeing Afghanistan after the Taliban’s takeover. It’s a lot to take in, which is probably why HBO’s latest Sunday night series, The White Lotus, became a heavily-memed obsession on the internet. The show premiered in July, and its finale aired on Aug. 15—a period that shifted from “Hot Vax Summer” to the Delta Variant canceling fall plans.

It’s not surprising that The White Lotus, a show created by Mike White that follows both the hotel workers and guests at a luxury resort in Hawaii, would inspire discourse on apps like Twitter and TikTok. People are memeing certain scenes, the score, and everyone’s favorite guest, Tanya (Jennifer Coolidge). Media Twitter also loves discussing Rachel (Alexandra Daddario), a freelance journalist feeling conflicted in her career after marrying a wealthy man. Maybe a show where no one is having a good time on their island vacation (OK, maybe like one character did) was the perfect mood for a summer that was overhyped. But now that it’s over, we need something else to fill the void. Although we live in an era where there’s almost too much content, only a handful of titles really take on a life of their own online.

If you’re fascinated by the myriad of ways our world evolves in every moment, Nautilus is for you. It focuses on scientific ideas that matter, featuring stories that will challenge and enrich the way you view the world. Discover new, surprising perspectives on how science interacts with all aspects of life—medicine and health, of course—but also politics, art, food, work, technology, and sports. Join a community of curious readers exploring scientific subjects in profound, unexpected ways.

What’s up with the Alabama sorority TikToks?

#BamaRushTok is a TikTok trend dominated by young women competing to join the University of Alabama’s many sororities during rush week. This event sees potential new members (PNMs) attend a busy schedule of themed events relating to Greek life. It’s a week-long combination of job interview and party crawl, and Alabama’s rush week is particularly intense.

Alabama sorority TikTok is fascinating for the same reason as any other super-niche subculture. These women care about rush week in a way that’s fully incomprehensible to outsiders, dedicating a ton of time and money to presenting themselves as the perfect sorority girl. The fact that this is based around a week-long event turned #BamaRushTok into a kind of live soap opera. The women of #BamaRushTok represent the ultimate stereotype of sorority life: Rich, skinny girls who are almost all Caucasian, and who adhere to an incredibly specific type of polished femininity.

Correcting vaccine misinfo, one video at a time

Tracy, who posts under @scitimewithtracy, is cutting through all the vaccine misinfo on TikTok. She has a Ph.D in microbiology and has worked as a scientist and senior lecturer; she joined TikTok because she “made a resolution in 2020 that I wanted to laugh every day.”

In her early videos, she broke down the mechanics of the vaccine and immunity in a way that’s easy to understand. But more recently, Tracy employed a rapid-fire debunk approach to address TikTok accounts spreading bad info. One series was posted to Twitter and blew up last week. The initial video has more than 5 million views.