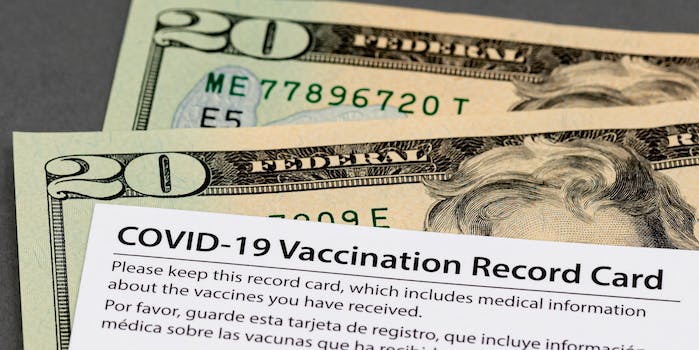 This week on the internet: Fake vaccine cards and fanfic drama

Plus: The new TikTok food trend.

As COVID-19 cases continue to rise around the world, more businesses and institutions are requiring proof that you received the jab. At last weekend’s Lollapalooza music festival in Chicago, attendees had to show a vaccine card or a recent negative COVID test result for entry. New York City announced a mandate this week that requires customers to show proof of vaccination for indoor venues like gyms and movie theaters. Employers and universities are now also starting to require vaccination. So it shouldn’t surprise anyone that people are paying for fake vaccine cards.

The vaccine is free—and the card that lists when and where you got the vaccine is also free. Yet people are reportedly paying up to hundreds of dollars for a fake card in order to receive entry to a variety of places. At Lollapalooza, attendees posted videos about security not checking the vaccine cards very carefully. If you search the term “fake vaccine card” on Twitter, you’ll see a number of tweets from people asking their followers if they know where to get a fake card. You’ll also see several other tweets asking why people would pay for something that they can legally get for free. (On the other hand, you might have to pay thousands of dollars in fines if you’re caught with a fake card.) The White House, meanwhile, is teaming up with influencers to promote vaccines. Will any of this help—the campaigns, the mandates, the social media outreach? We’ll see. But please don’t get a fake vaccine card!

Everything you need to know about CBD topicals

Since the market for CBD has exploded, the trend of products containing the hemp-derived compound went from sensible to absurd fast. Now, not only can you find products with a purpose (like hemp salves and CBD lube) but you can find some rather ridiculous infusions, too. Anyway, some CBD topicals are worth investing in—and we’ll explain why.

Author Romilly King has self-published more than 20 ebooks in the past year, a prolific output that earned a dedicated customer base on Amazon and Goodreads. But according to some fanfic-reading internet sleuths, there’s an unpleasant explanation for this author’s unusually copious productivity: She’s plagiarizing some of her work from other people’s fanfiction.

TikTok has zeroed in on its latest food hack: frozen honey. And it now comes with a warning from health experts that consuming too much could give you diarrhea.

This food hack is one of many that’s seeped out of TikTok. Some people simply freeze honey in the bottle (or in a water bottle) and then squeeze it out to eat. Several tutorials show TikTokers adding corn syrup or Kool-Aid to the honey to help its consistency and flavor. Seems like an easy summer treat, though many of the videos come with disclaimers that ingesting the honey led to upset stomachs. “Note to self: Don’t eat three mouthfuls of honey in the morning, it will cause urgent bowel movement,” said lalaleluu.

In the latest episode of our Behind the Seams YouTube series, we delve into the costume design and visual choices that make the sci-fi series The Expanse so great.