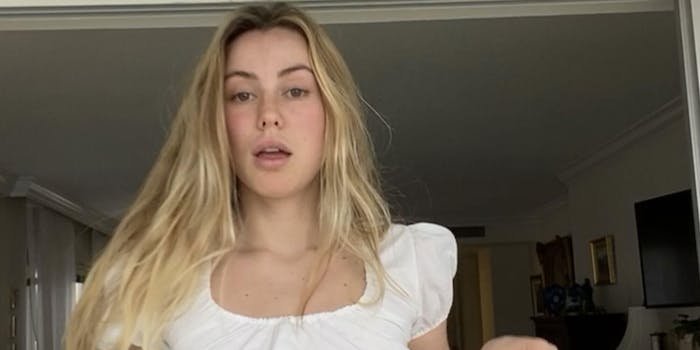 This week on the internet: ‘Cat Person’ & Caroline Calloway are back

I remember vividly the day Cat Person was published in the New Yorker. Everyone was sharing the link to the short story on social media, which included the memorable photo of an extreme close-up of two pairs of lips touching—one pair open, the other closed. The photo was creepier upon finishing the story, which was about a young woman’s uncomfortable sexual experience with an older man. The story went viral in a way that no other short story had before (short stories never go viral). The author, Kristen Roupenian, got a book deal. Then the internet collectively forgot about Cat Person until news broke in January that Cousin Greg from Succession was appearing in a film adaptation of the story. But on Thursday, we got a doozy of an update: a woman published an essay in Slate claiming that the main character in Cat Person was lifted from her real life.

Like the narrator, she dated a man more than a decade older than her. She also worked at the same movie theater and attended the same college. The physical descriptions of the man she dated, who is named Robert in the story, were also eerily similar. But, she says, the rest of the story—especially the sexual encounter—did not mimic her relationship with this man. It wasn’t just a coincidence: Alexis Nowicki eventually reveals that she spoke to Roupenian, who admits that the character in Cat Person was based on her—even though the two had never met. Roupenian, it turns out, knew the man she dated. While it’s a crazy story, it’s not uncommon for fiction writers to create characters based on people from real life, whether they have met those people or not. The Slate essay gave us yet another round of Cat Person discourse on Twitter. Writer Joe Berkowitz summarized it best: “This phase of Cat Person discourse proves it’s not enough just to avoid dating writers. No one is ever safe as long as writers live among you.” You have all been warned.

CHECK OUT THE LATEST FROM BAZAAR

What if a wireless mouse and an NES controller had a baby?

It’s easily the coolest-looking mouse. It handles as smoothly as the gamepad of your youth. And best of all, it’s under $25. The 8BitDo NES Mouse is yet another success story for 8BitDo. It has conquered the world of gamepads and is inching toward conquering mice. What’s next, keyboards? Full blown computers? If you’re on the market for a wireless mouse that’s both functional and gorgeous, we can’t recommend it enough.

How do you define ‘goofy’?

Andrew Curtis put cringe to the test with his recent TikTok. On June 23, Curtis posted a TikTok with the caption, “It’s totally OK to let your goofy side shine through.” To illustrate this point, he does a couple of funny faces and dances then laughs it off.

The video now has more than 21 million views, and it appears from Curtis’ other videos that his “goofy side” is not isolated to one TikTok. But his floofy-haired sincerity drew out some pretty dark definitions of goofy, for example, feigning jumping in front of a train or edging a wheelchair a little too close to a set of stairs. —Audra Schroeder, senior writer

Caroline Calloway, the Instagram influencer whose scams have often captivated and confounded the internet, is back with a collection of $75 face oils whose name calls back to one of the original—and ultimate—product scams: Snake Oil.

As Calloway explained in a series of Instagram Stories posted to her account on Monday, she’s obsessed with making her own face oils for both herself and her friends. Referring to those creations as “potions” (which she used in quotations), Calloway would take bottles of products she already had and mix them together; “I don’t invent anything new usually,” she noted. In an Instagram post later in the week, she shared a photo of her products’ labels and the ingredients, which include grape seed oil and rosemary oil. —Michelle Jaworski, staff writer

Dom Toretto is here to help characters from other franchises.