Everything you need to know about how governments create harmful copyright policies with international trade agreements. Because the Internet as we know it is in danger.

Imagine you’ve made a playlist for your friend, burned it to a CD, and decided to give that to her as a gift. Or you have a website where you post PDFs of old vintage books salvaged from yard sales. Or you’re a teacher, and you want to show a film you’ve bought on DVD to your students but realize that its format won’t play with the school’s player. You find a way to make it work, and in an attempt to be helpful, you decide to share that method online so others won’t have to go through the same headache.

Now imagine that any one of the above examples could lead you to be cut off from the Internet, have your computer seized, fined up to $150,000, or even land you in prison. If the kinds of copyright laws that are being pushed forward in trade agreements truly come into force, you wouldn’t even have to imagine. This could all become reality.

Movie studios, music labels, and major publishers have quietly been waging a cultural war. To them, exciting new technologies, new forms of cultural expression, and even innovative uses of their content we are seeing aren’t good things at all; they pose a direct challenge to their business. The content industry’s solution to this “problem” has been to spend millions of dollars lobbying legislators and filing lawsuits to attempt to drastically expand the enforcement and scope of copyright protection over creative works. 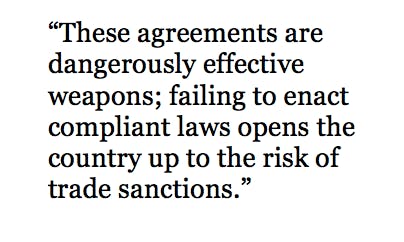 All of this comes at the dramatic expense of tech users. These big content players want copyright to last for as long as 140 years. They want higher fines and criminal penalties for sharing and remixing content, and they push for provisions that are designed in a way that, if enforced, would require third parties like Internet Service Providers (ISPs) to monitor their users’ activities.

With the advent of the Internet, information has become vastly easier to share across national boundaries. Sharing a video or a book across countries used to mean expensive postage and a good deal of patience. Now all it takes is a sturdy network connection and—depending on the speed, of course—a few short minutes. Copyright industries don’t see this new reality as an opportunity. Far from it. They see it as a threat.

So content-owning giants have shifted their attention towards international policy. They want to expand their rights so that much of the copyright protections vigorously awarded to them in the United States are also enforced in other countries. As a result, established institutions like the United Nations and the Organization for Economic Cooperation and Development (OECD) have developed and pushed principles and declarations that often influence domestic copyright law in ways that are highly favorable for traditional content industries.

Today’s content lobbyists want even more. So a new front has opened up, and that front is trade agreements. These agreements are dangerously effective weapons; failing to enact compliant laws opens the country up to the risk of trade sanctions. No one wants trade sanctions—such as expensive tariffs placed on exports—initiated against them.

Most people think of trade agreements as establishing rules between countries over physical commodities: bananas, textiles, cars, and so on. These trade arrangements can seem almost apolitical, with obvious mutual benefits for the negotiating countries. But this is a common misunderstanding of the incredibly broad regulatory scope of trade agreements (and why they can be such an effective tool to push through dangerous policies).

In actuality, trade agreements cover much more complex arrangements: financial investments, labor practices, and even intellectual property (IP) enforcement. They are also informed by the same high level of corporate lobbying we see influencing the legislative process in any given country—too often leading to policies that are biased toward a few select powerful companies.

This results in countries trading away flexibility to set sound domestic IP law in exchange for access to certain commodity markets where their current economic strengths lie. So, for example, New Zealand—a country with a powerful dairy industry—may trade away its current copyright standards if the United States is willing to get rid of all tariff barriers for the import of milk products. It smacks just a little bit of extortion, doesn’t it?

What you don’t know will, in fact, hurt you

The negotiation process for a trade agreement is far from democratic or transparent: negotiating parties don’t officially release the text of the agreement while it’s being negotiated, or even publicly disclose what their policy positions are on any given issue. Trade representatives excuse their secrecy by claiming that they can’t make trade objectives public, since exposing them would undermine their bargaining power against those other nations. To the trade offices, this seems to be enough justification to shut out the public and civil society from ever knowing what is happening at the closed-door negotiations. Unsurprisingly, all this makes it very hard for us to understand what’s going on and what’s at stake, often until it’s too late.

Private interests have no such difficulty. It’s as simple as signing a non-disclosure agreement (NDA) and logging into a website—that’s all it takes for them to see, edit, and comment on drafts of a trade agreement’s text. Civil society groups, like EFF, haven’t signed these NDAs because that would surrender our ability to publicize or even advocate around what’s going in these secret negotiations.

Of course, the content industry knows all of this too well. That’s why for nearly 20 years, it has done everything in its power to ensure that trade agreements include copyright provisions that expand their protections at any cost. Based upon past agreements and the leaked text of currently negotiated agreements, we know that the content industry is lobbying for provisions that would literally lock up decades of culture and knowledge with harsh enforcement measures.

The Trans-Pacific Partnership, for example, could criminalize music sharing between friends and ban the creation and circulation of tools that break digital rights management (DRM) on content, even if the end use is legal—like the examples given at the beginning of this piece. It would turn ISPs into copyright enforcing Internet cops, forcing them to monitor your online behavior and possibly disconnect you if they determine, even without a court deciding so, that what you have done might be copyright infringement.

These sorts of policies should strike fear into the average Internet user’s heart. It could have a chilling effect on the entire culture of the Internet, discouraging users from sharing or interacting with any copyrighted work at all.

Time and time again these copyright provisions, parroted from the U.S. Digital Millennium Copyright Act (DMCA), have been copied and pasted successfully from trade agreement to trade agreement. The TPP almost exactly mirrors provisions in the Korea-US trade agreement; the Canadian-EU trade agreement (CETA) mirrors the Anti-Counterfeiting Trade Agreement (ACTA); the list goes on and on.

This practice of copying and pasting into trade agreements is called policy laundering. It’s what happens when unpopular policies that would fail in a public forum are cycled through outside institutions without the same democratic oversight. If one trade agreement fails, say for example, like the failed agreement between United States and Thailand, all it takes for the content industry is to shift its focus on to another trade forum. Since there is no single governing body that regulates these policies, these venues have become a moving target, circumventing accountability while raising the global standards of copyright enforcement in the dark.

If the content industry gets its way, copyright laws around the world will continue to ratchet upwards. They’ll grow ever more disastrous for the future of the Internet, enacting policies that suffocate users’ rights with each new agreement.

Thankfully, however, the tide is turning. That’s due to two main reasons. 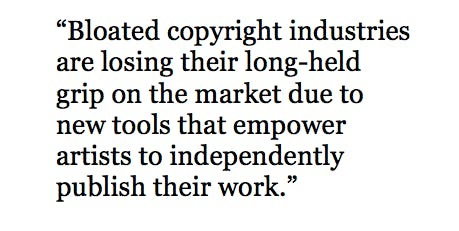 First, these bloated copyright industries are losing their long-held grip on the market due to new tools that empower artists to independently publish their work. The content industry’s approach so far has been to treat audiences like potential criminals and to lash out against sharing and creativity in the name of profit. But a new generation of tech innovators have realized that it is much more important to focus on fostering a trusted relationship with fans while exploring new methods of monetizing their work. New distribution platforms—such as Kickstarter and VHX—give independent creators direct access to audiences, freeing them of the old publishing giants. In the face of this movement, big-name studios and labels are becoming less relevant and less powerful. We no longer need things like movie theaters, cable TV, or the radio to deliver quality content to us. We can get it directly from the artists themselves.

Second, people around the world are starting to notice the content industry’s bad faith attempts at legislation. In February 2012, hundreds of thousands of Internet users across Europe went to the streets to protest ACTA. Only when people went out to the streets en masse to demonstrate this illegitimate agreement did elected representatives determine that they needed to actually represent a public that wasn’t tolerating that legislation. A few months later, the European Parliament voted ACTA down.

So far that’s been the only agreement that has been defeated for its copyright policies, and there’s a lot more work to do. Governments are currently complicit in enacting dysfunctional copyright policies that whittle away at Internet users’ rights. When trade delegates are at the table to negotiate an agreement, the interests that speak loudest to them are the industries that currently have the most economic clout in their country. As of now, they only seem to be listening to those interests.

What we can do

The business of trade policy must be dragged into the light, demystified, and disentangled from the special interests that currently determine their agenda. Despite the fact that trade agreements are negotiated in the dark, they uphold legitimacy by the fact that they directly influence the creation of domestic laws in the countries that sign them. If this continues, we will forever be playing an international losing game of whack-a-mole with trade agreements carrying abusive copyright policies.

The Internet should be as innovative and culturally thriving of a place as possible, and we need the tools to make it so—it should not be a place where we’re fearfully cautious about what we do and what we share. Nothing good can come out of a system where governments enact laws that place bloated, increasingly irrelevant copyright industries on a pedestal at the cost of the Internet’s future. One major front to our fight to protect a free and open Internet is ensuring that trade agreements do not trump our rights in the name of copyright enforcement. Trade officials must become accountable to the public interest. One crucial first step is to demand that our elected representatives work in our interest to make these trade negotiations transparent.

If you are in the United States, you can go to EFF’s Action Center and send a message to Congress to put an end to these secret, backdoor TPP negotiations.

Maira Sutton is a Global Policy Analyst with the Electronic Frontier Foundation, monitoring emerging tech policy around the world with a focus on free speech, and intellectual property and innovation issues. Specifically she leads EFF’s activism around trade agreements carrying copyright enforcement provisions, such as the Trans-Pacific Partnership agreement (TPP), and the Anti-Counterfeiting Trade Agreement (ACTA). You can follow her on her personal twitter account at @maira.