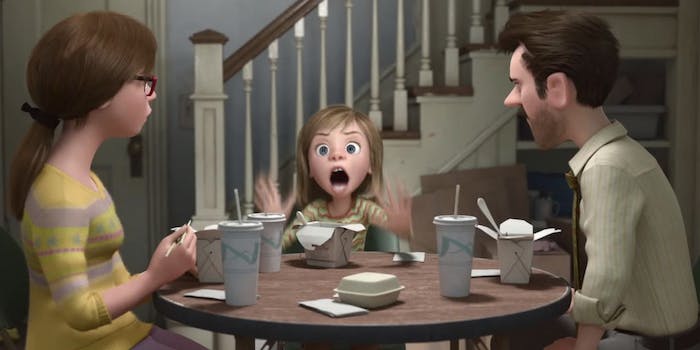 Pixar’s ‘Inside Out’ is terrifying and definitely not for kids

Editor’s note: This review is of the Inside Out screening at Danberry Cinema in Middletown, Ohio.

In Pixar’s new film Inside Out, what you see isn’t necessarily what you get.

Let me clarify. Sometimes the marketing gets the best of a film, making promises that the studio can’t keep. Perhaps the ads rely on the face of a star who only ends up in a single scene. Sometimes studios can’t resist making a drama appear to be a romantic comedy.

But in the case of Inside Out—the trailer which led me to expect a tearjerker about a young girl coming to terms with the pangs of adolescence—the film that made it to the screen was a terrifying spectacle, and that worked to the benefit of the film and its older audience.

The studio that brought you modern classics like Toy Story, Monsters Inc., Wall-E, and Up went in a new direction with Inside Out. The film follows Quinn (Stefanie Scott), a teenager mourning the loss of her departed mother, and it quickly delves into the supernatural. In an ill-fated effort to contact her mother, Quinn enlists the help of a medium, Elise, performed with remarkable realism by veteran actress Lin Shaye. Elise, joined by two ghost-hunters, discovers an evil presence in the house.

It’s not a spoiler to say that, like the audience, Quinn got a little more than she bargained for.

Inside Out is full of thrills, chills, bumps, and thumps. A true departure from Pixar’s animated form, this live-action horror movie shows that the studio can defy expectations outside of its comfort zone. I would suggest, however, that parents proceed with caution. Although the MPAA rated Inside Out a harmless PG, it features gruesome murders of youngsters early in the picture that had scores of children in my theater screaming in terror. Consider yourselves warned.

Pixar’s Inside Out, directed by Leigh Whannell (writer of Insidious, Insidious: Chapter 2), is now playing in theaters everywhere.